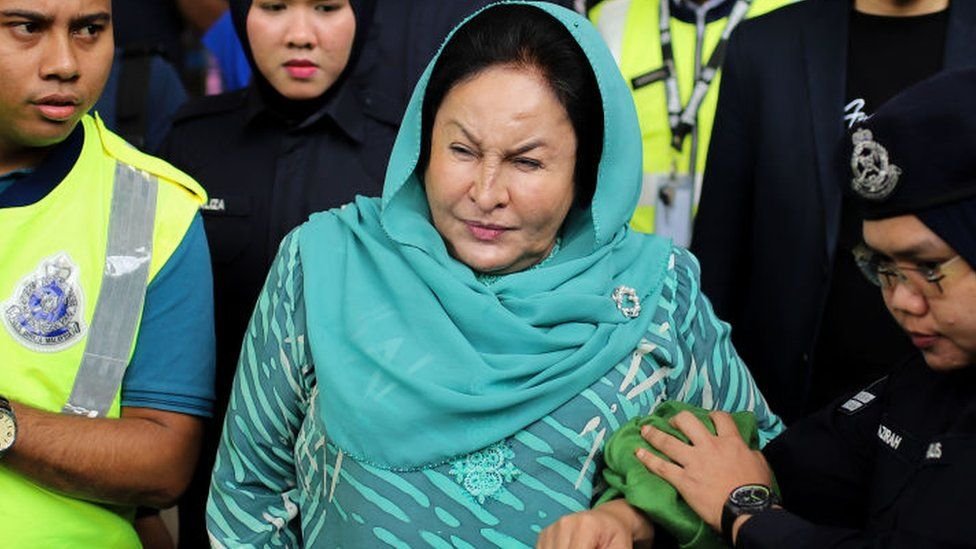 The wife of ex-Malaysian prime minister Najib Razak has been sentenced to ten years in prison on each of three bribery charges.

The High Court said the jail terms would run concurrently.

It comes days after her husband began serving a 12-year jail sentence for corruption.

The 70-year-old is known for her love of luxury goods and jewellery. When Malaysian police raided the couple’s properties in 2018, they found a $1.6m gold and diamond necklace, 14 tiaras and 272 Hermes bags.

Rosmah, who had pleaded not guilty, sat quietly in the dock as High Court judge Zaini Mazlan delivered the verdict on Thursday afternoon.

“I must admit that I’m very sad with what happened today,” she said tearfully to the judge after the verdict was delivered, according to a Reuters report.

She has also been fined a total of 970m ringgit. However, it is unclear when she will start serving a prison sentence, as she has been granted a stay of execution pending her appeal.

Rosmah still faces 17 other charges of money laundering and tax evasion. She has pleaded not guilty to these charges.

Prosecutors claimed Rosmah had sought a bribe of 187.5m ringgit and received 6.5m ringgit from an official of a company that won the bid for a solar energy project.

She had earlier argued that she was framed by her former aide as well as other officials involved in the project, but the judge called her defence “bare denial and unsubstantiated”.

Her legal team had also filed a last-ditch application on Wednesday to get the presiding judge recused. They argued that an alleged leaked document which stated that her guilty verdict had been decided ahead of time had left her with no faith in the judge’s ability to hear the case fairly.

But Judge Mazlan dismissed the recusal application, saying the prosecution had proven their case beyond a reasonable doubt.