Video: One Dead As NPP And NDC Supporters Clash At Nkrankwanta
Advertisement 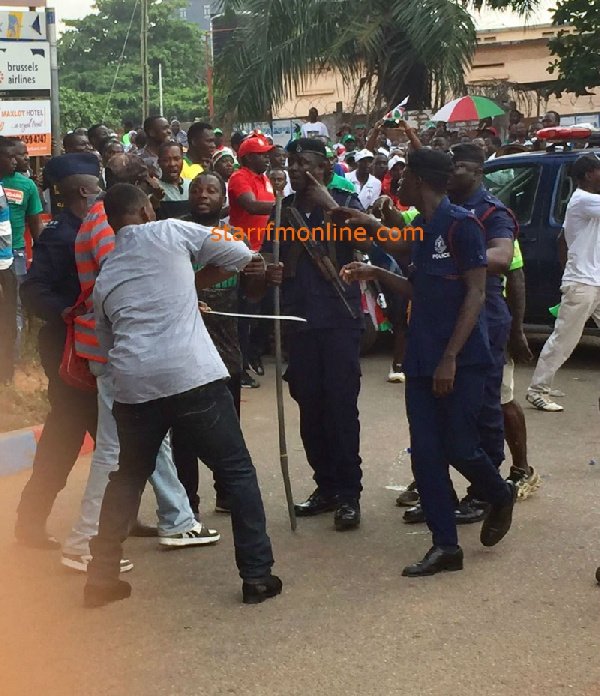 Reports from Nkrankwanta in the Dormaa West District of the Bono Region indicate that a clash between some supporters of the New Patriotic Party (NPP) and the National Democratic Congress (NDC) on Saturday resulted in the death of one person.

Two people, according to the reports, who sustained gunshot wounds are currently receiving treatment at the Dormaa Ahenkro Presbyterian Hospital.

A video seen by Graphic Online shows a pickup vehicle and a motorbike in flames.

According to the reports, the clash occurred at the Dormaa West District office of the Electoral Commission on Saturday, August 8, 2020 in the course of the mop-up voters registration exercise during which guns were fired.

It said those who sustained gunshot wounds during the incident were rushed to the nearby Dormaa Presbyterian Hospital but one of them identified only as Kofi Labatu was pronounced dead on arrival.

The Member of Parliament for Dormaa West, Mr Ali Maiga Halidu confirmed the incident in an interview with Graphic Online.

He confirmed the death of Kofi Stephen adding that he was a member of the NPP while one of the injured was from the side of the NPP and the other from the NDC.

According to him, the gunshots that killed Kofi Stephen and injured the two others were fired by the security personnel.

Police reinforcement from the Bono Regional Police Command has been sent to the district to ensure peace and order.

READ ALSO; Christian Council Endorses The Use Of The Military To Intimidate Ghanaians Who Support Their Opponents