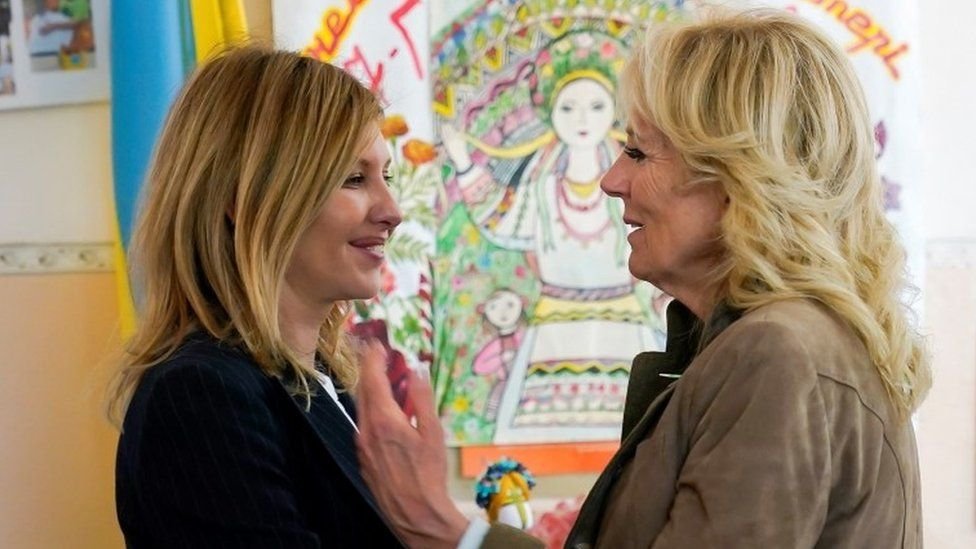 The two first ladies met at a school in the border town of Uzhhorod.

It was Mrs Zelenska’s first appearance in public since the Russian invasion of Ukraine began on 24 February.

The US imposed new sanctions – including visa curbs on 2,600 Russian and Belarusian individuals – in response to the Russian invasion.

Three Russian TV stations and executives from Gazprombank were also sanctioned by Washington.

Meanwhile, G7 leaders said they were committed to phasing out or banning Russian oil. 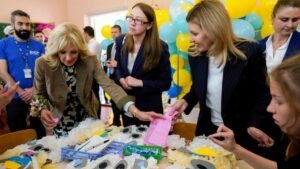 The meeting between the two first ladies took place at a school which is currently being used as a temporary shelter for displaced people.

Mrs Biden said she wanted “to show that the people of the United States stand with the people of Ukraine”, adding that the war – now in its third month – had been “brutal” and had to stop.

Mrs Zelenska said it had been a “courageous act” to visit Ukraine while it was at war.

She added that the visit, on Mother’s Day in Ukraine and in the US, was very symbolic.

“We feel your love and support during such an important day.”

The two women later sat down and played with some of the dozens of children who are currently housed at the school, making tissue paper bears – the symbol of the local province.

A senior US official said the new US sanctions would hit 27 Gazprombank executives. However, the measures do not freeze the firm’s assets or outlaw transactions with it.

It is unclear who is on the list of 2,600 Russian and Belarusian individuals to be hit with visa restrictions.

The US announcement came at the end of a day of diplomatic events, which included visits to Ukraine by Canadian Prime Minister Justin Trudeau, the speaker of the German Bundestag and Mrs Biden.

Mr Trudeau announced that Canada was sending new weapons and equipment for Ukraine’s army, as well as imposing its own range of new sanctions on Russian individuals and companies.

“What Putin needs to understand is that the West is absolutely determined and resolved to stand against what he is doing,” Mr Trudeau later told Reuters in an interview.

“His illegal war, his escalations, his crossing of red lines by choosing to further invade Ukraine means that we will do as a world everything we can to make sure that he loses.”

The UK also announced a fresh package of sanctions on Russia and Belarus, targeting £1.7bn ($2.1bn) of trade.

The EU is currently finalizing a sixth round of sanctions on Russia but has so far been unable to agree on the measures, including a phased ban of Russian oil.

EU countries are split on how soon they can wind down dependence on Russian energy supplies. Europe gets about 40% of its natural gas from Russia.

The new US and Canadian sanctions were announced on the eve of Victory Day in Russia, which celebrates the Soviet Union’s victory over Nazi Germany.

In a statement, the G7 denounced Russia’s President Putin, saying that “his actions bring shame on Russia and the historic sacrifices of its people”.