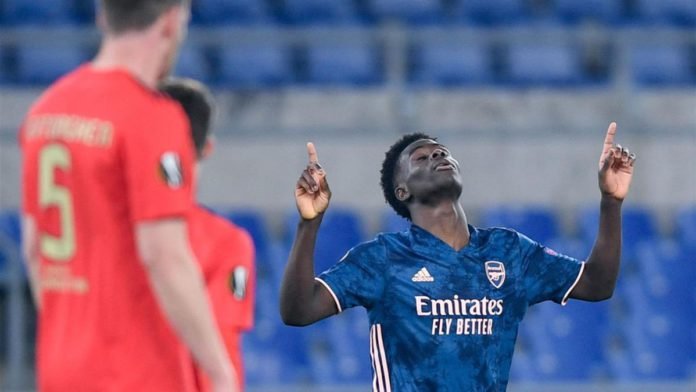 Bukayo Saka’s equaliser earned Arsenal a 1-1 draw in the first-leg of their Europa League last-32 clash with Benfica in Rome, with the Gunners missing several chances to snatch victory.

Skipper Pierre-Emerick Aubameyang was guilty of missing the best of the openings for Arsenal, the worst of which was an absolute sitter in an otherwise poor first half.

The game sprang into life after the break, however, with Emile Smith Rowe handling in the penalty area to concede a penalty, which the Europa League’s top goalscorer this season – Pizzi – converted to give his side a 55th-minute lead.

That advantage lasted less than two minutes as an incisive move was finished off by Saka to level things up, but after Aubameyang again missed another glorious chance, the Gunners settled for a draw to take into the second leg.

Mikel Arteta named the same starting XI that beat Leeds 4-2 at the weekend, but the Gunners struggled to find any rhythm early on.

Playing in Rome instead of Lisbon due to Covid-19 travel restrictions, the designated home side were opened up late by a slick Arsenal move, one that Aubameyang, somehow, contrived not to finish off, with the goal at his mercy from six-yards out.

Arsenal started the second half well, but Smith Rowe’s handball, with the ball hitting his arm when raised above his head, giving Pizzi the chance to score his seventh goal of this season’s competition.

A sublime pass from Martin Odegaard split the Benfica defence that resulted in the equaliser, with their still time for Aubameyang to pass up another chance for his side to take a lead into the second leg in Athens next week.

‘I Don’t Have Time For Such Nonsense’ – Dr. Tamakloe Fumes As He Blasts Departed Coach, Kosta Papic