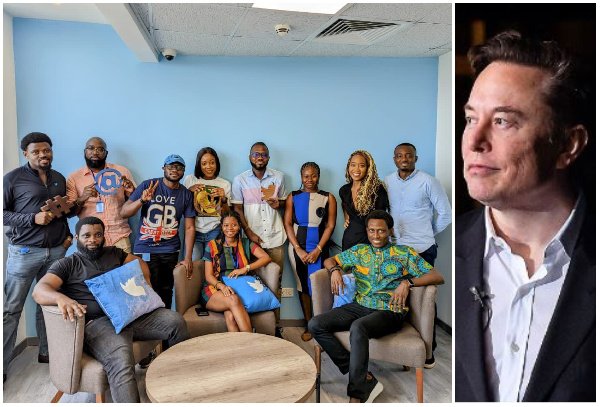 The unfairness of the termination compensation they were provided with has prompted the employees of the Twitter Africa branch in Ghana to pursue legal action against their boss, Elon Musk.

Comparatively speaking, terminated staff at other microblogging sites in countries like the US have received proper severance payouts that are outlined in detail.

It should be recalled that at the beginning of November 2022, just a few days after the Twitter Africa office in Accra began conducting business physically, all of the office’s employees received termination notices via their personal emails.

This, according to CNN’s Larry Madowo, was caused by a lockout that prevented the Twitter Africa personnel from accessing both their work computers and their work emails.

As a matter of fact, on November 4, they received notifications of termination which read:

“The company is reorganizing its operations as a result of a need to reduce costs. It is with regret that we’re writing to inform you that your employment is terminating as a result of this exercise.

“Your last day of employment will be 4th December 2022. You will be placed on garden leave until your termination date.” “At least for the African staff, that email did not even mention them by name; it just said ‘see attached.’ And even though Elon Musk said everybody who got fired would be getting at least three months severance above the law – that’s in the US.

Those in Africa office didn’t get the next step, or if they’re going to get any severance at all, which some lawyers in Ghana are now pointing out could be a violation of Ghanaian employment law,” Larry Madowo highlighted.

However, according to a revised CNN report, the disgruntled fired African employees want fairness in the severance packages they are being given.

According to Larry, the staff has since retained a lawyer who is preparing to sue Elon Musk, the richest man in the world, over this issue.

“They are asking to be treated the same way Twitter treated employees who were departing in the US and Europe; they want three months severance pay like Elon promised and other relevant benefits: stock investing, continued healthcare, and that sort of thing.

“But they feel that’s not happened; they have not been treated the same way as everyone at Twitter,” he emphasized.

EXCLUSIVE: Fired Twitter Africa employees are standing up to Elon Musk, have hired a lawyer & are demanding what they're owed.

The Ghana team was only offered 'vague' severance pay after CNN reported on their plight. They rejected it