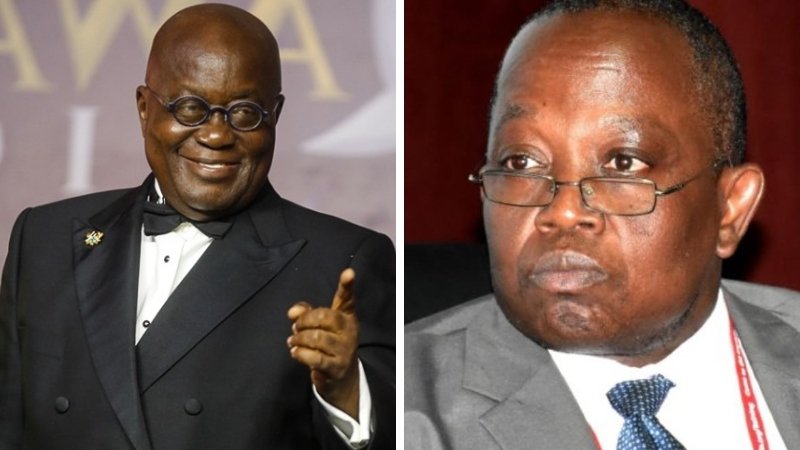 The president of Ghana, Nana Akufo Addo Addo Dankwa has today the 29th of June, 2020 asked the Auditor General of the country, Mr. Daniel Domelevo to proceed on an aggregated leave, an announcement from the administration has said.

In a statement signed by Director of Communications at the presidency, Eugene Arhin, it was noted therein that the President’s decision to ask Mr.Domelevo to take his accumulated leave is based on sections 20 (1) and 31 of the Labour Act, 2003 (Act 651), which applies to workers including public office holders such as the Auditor-General.

“According to the Act, a worker is entitled to annual leave with full pay, in a calendar year of continuous service which cannot be relinquished or forgone by the worker or the employer,” the statement said.

See the full statement below;

However, the directive albeit constitution has raised a red flag as past and eminent happenings point out that the move was made by the government to cover up foul play with how it spent the COVID-19 Fund.

It can be recalled that the minority in parliament recently urged the Auditor General to audit how the COVID-19 Fund was spent by the government.

Some Ghanaians also believe that the Auditor General might be on his way of being sacked since he was not appointed by the ruling party and records show almost all public service workers appointed by the previous government were all sacked.

But here is the thing, it is in the interest of the President to protect the independence of the Auditor-General. Any attempts to remove him from office, no matter how clever, will be seen as interference with his work and will irreparably tarnish the President’s record.

Once appointed the Auditor General must be allowed to hold office until the age of sixty years subject to an Article 199(4) extension for a 2+2+1 post-retirement tenure.

Read Also:  Gloria Akuffo Does Not Deserve to be Chief Justice After Helping the EC to Deny Sall the Right to Vote - Franklin Cudjoe

On the record, I also urge the President to grant the Auditor General this Article 199(4) dispensation.

The law is abundantly clear that the AG’s right to leave of absence cannot be varied to his disadvantage. The reason for the law is to protect his independence. Thus, the AG cannot be forced to take his leave or to forfeit his leave.

There must be a compelling reason to force the AG to take his leave. His leave conditions must be determined by the more specific Audit Service Act not the general Labour Act (generalia specializes non-derogant).

I do not find the Mills’ precedent persuasive. Actually, I find it amusing.

Nor do I find sections 20(1) or 31 of the Labour Act as a reasonable basis for forcing the AG to take his leave. Section 20(1) merely provides for a leave entitlement and section 31 merely voids any agreement to relinquish the entitlement.

Read Also:  Akufo-Addo Denies Abronye a Job Opportunity in His Government After Submitting his Application

There are several ongoing audits, including KROLL, MP backpay, etc. where one can reasonably say the AG is clashing with the executive.

Under those circumstances, any attempts to remove the AG will offend separation of powers, constitutionalism and the growing of our institutions.

The President must reconsider and the AG must stand his grounds.

Civil society groups too have a role here. They should, as in Malawi, protest this move to interfere with the functions of the AG, culminating in lawsuits and an injunction preventing the removal of the Chief Justice for the same accumulated leave “offence.”