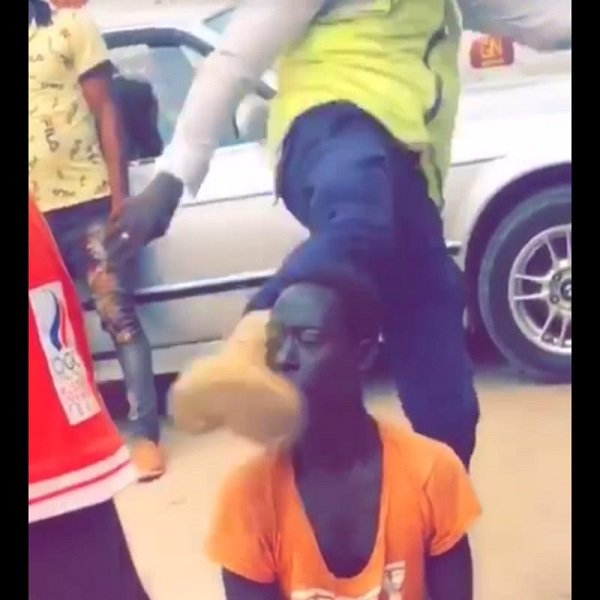 The emerging string of lawlessness in the country on the part of both civilians and servicemen seem to have no end in sight as such lawless acts continually spring up each day.

In recent times, acts of violence and lawlessness by servicemen have sparked a growing public mistrust in the security and other law enforcement agencies. Following such lawlessness in the country, the content of this viral video is no exception.

The video shows a young man being brutally assaulted by some Metropolitan guards in Swedru.

He is seen in the video being forced to kneel as he received several rounds of kicks, mostly on his head.

It is not yet clear what the young man’s offense was, but the level of physical assault meted out to him by the guards was definitely against the laws of the land and inhuman.

This, sadly, is not the only act of violence and lawlessness captured on camera, quite recently some Police officers reportedly beat up some journalists of the Ghanaian Times.

The three journalists who were from a day’s assignment were physically assaulted by some officers at Kinbu in Accra Central for daring to confront one of the officers for flouting road traffic regulations.

Another instance of lawlessness in the country happened last week when a commercial bus driver and his conductor were captured in a video brutally assaulting a police officer.

The two were arrested and subsequently arraigned before court on Monday. Even though President Akufo-Addo has assured Ghanaians of his commitment of fighting the rising acts of lawlessness and impunity in the country, it is not yet clear what steps the president is hoping to put in place to address the issue.

In the spate of gross mutual disrespect for rights, most Ghanaians argue that cases involving citizen brutality get little or no attention as security persons involved are not prosecuted, with most of such cases dying out with mere apologies even in instances where perpetrators are identified.

However, in a statement signed by Mr Simon Tenku, Assitant Superintendent of Police for Director-General, Public Affairs, Accra, has stated that the person seen kicking the victim in the viral video is not a Police officer as widely speculated but a Metropolitan Guard of the Swedru Municipal Assembly.

He added that, “the preliminary investigation shows that at about 3:00pm on Thursday, 21 March 2019 at Agona Swedru in the Central Region, the victim was arrested by civilian including Metropolitan guards of the Swedru Municipal Assembly for an alleged offense. The civilians started assaulting the victim/suspect. However, when the attention of the police officer on duty nearby was drawn to the scene, the officer went to the rescue of the victim and filed a report at the Agona Swedru Police Station.”

“The Police Administration hereby emphasizes that the person seen kicking the victim in the video is not a Police Officer.”

“The matter is being investigated by Swedru Divisional Police Command.”

Accident claims close to 60 lives at Amoma Nkwanta near Kintampo

2 women found dead near hotel; used and fresh condoms retrieved at the scene