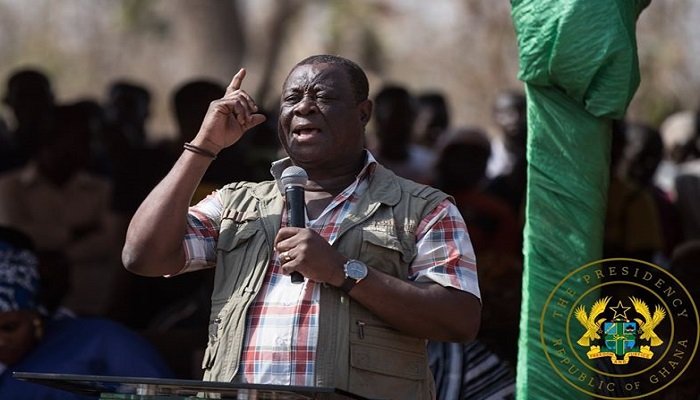 The Minority in Parliament has slammed the Roads and Highways Minister Kwasi Amoako-Atta over his comments slighting Ghanaians who demonstrate in demand for better roads.

The Minister called the bluff of such protesters arguing demonstrations do not fix or build roads.

According to the minister, Amoako-Atta is appalled by educated people who embark on such exercises.

“It is unreasonable for anybody to say that all roads everywhere should be fixed simultaneously. So these demonstrations should stop. Sometimes you get people who are supposed to know better, well-educated people who should advise their colleagues joining demonstrations. Demonstrations don’t build roads,” he told the media when inspecting the 31.7km Kwafokrom to Apedwa road in the Eastern Region which forms part of the Accra-Kumasi dualization project.

But speaking to Starr News, the minority spokesperson on Roads and Transport Governs Kwame Agbodza accused the minister of exhibiting arrogance.

The Adaklu MP argued protests are the only language the government understands and so such protests will continue until all the poor roads are fixed.

“The Roads Minister understands that…one of the ways citizens are allowed to express their displeasure at what is happening is to protest peacefully. He is a minister because his party used numerous platforms to protest over everything.

“So when he says it doesn’t tickle him, I don’t know what he means…I think the Roads Minister should applaud people for choosing a method that is allowed in the constitution…his job is not to be tickled, his job is to fix the roads in this country…We shall protest, in fact he will see more protests, we are not perturbed by the insults but Ghanaians should notice this is the arrogance of power by the NPP.”

Meanwhile, This year’s Basic Education Certificate Examinations (BECE) will begin on Monday, 15 November 2021.
The 5-day exam will be written at all 2,158 centers across the country.

In all, 571,894 candidates are expected to take the exam. The management of the Ghana Education Service (GES), in a statement, advised candidates, invigilators, supervisors, school authorities, teachers and parents “to desist from any form of examination malpractice.”

The statement continued: “GES, WAEC and the security services are working jointly to ensure the smooth conduct of the examinations at all centres across the country.”

It advised supervisors and invigilators to ensure “strict adherence to the COVID protocols at all centres.”
It further revealed: “The school selection process will commence after the BECE,” with details communicated in due course.

The management of GES also wished all candidates taking this year’s exam “success and good luck.”

Mahama Bemoans State Of Economy To Akufo-Addo; Tells Him To Sit Up And Fix It