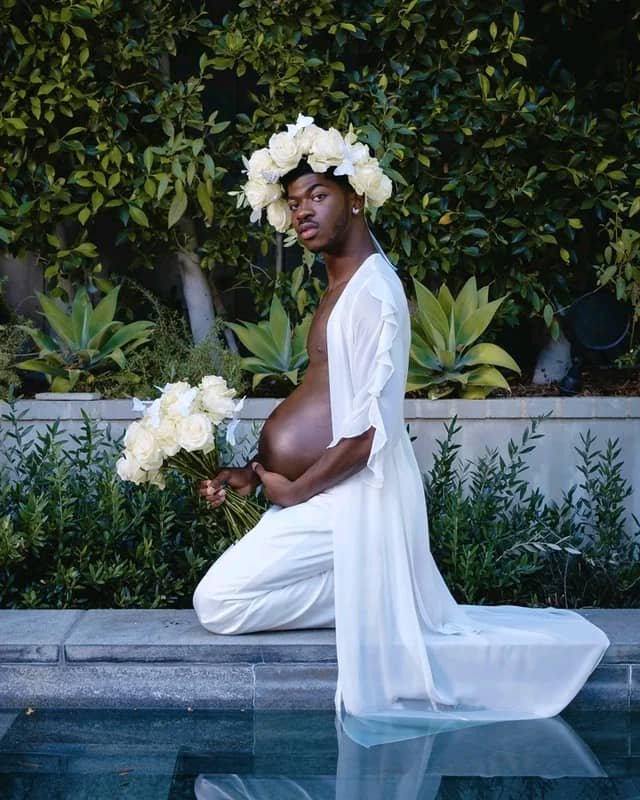 Lil Nas X hinted he was expecting; not a baby, but his debut album Montero.

The rapper who came out as gay ended his fans’ anticipation when he showed off his pregnancy in a video he posted across all his social media platforms.

In celebration of the impending delivery of his “baby” on Sept. 17, the musician, 22, did an over-the-top pregnancy shoot, complete with a bump and flower crown.

Lil Nas X (né Montero Lamar Hill) tells PEOPLE exclusively that he came up with the idea to do the shoot after listening to Megan Thee Stallion’s verse on his new song “Dolla Sign Slime” for the first time. “I was like, ‘You know what? That’s actually brilliant,’” he continues. “So now we have this entire thing coming out, and it’s going to be amazing.”

The timing of the photos coming out now also couldn’t have been better, as Lil Nas X just posted a spoof to Instagram on Monday of Drake’s Certified Lover Boy cover art featuring several pregnant women emojis with the difference being that his features pregnant men.

“I was like, ‘There’s no way the universe is lining up this perfect for this to happen,” he says with a laugh.

Asked whether the album is an immaculate conception of sorts, Lil Nas X responds, “I guess I am the father as well as the mother.”

“But I guess the producers who worked on it are like the dads too,” he says, before giving it another thought: “Or maybe uncles.”

Montero was largely created over the past year in lockdown. The creation of this new music, Lil Nas X said on Twitter last week, was “therapeutic.”

“I’ve changed in so many ways,” he says now. “I’ve changed the way that I handle a lot of situations, the way I manage my sadness and anger and just understanding that I don’t have to react to emotions in certain ways. I can’t choose how I feel, but I can choose how to react. I’ve learned to let people’s comments roll off my back.”

“The only person that really has to believe in me is myself,” he says. “It’s been a lot of self-affirmations this year that I probably would not have been able to do two years ago.”

From the personal “Sun Goes Down” to the catchy “Industry Baby,” the songs on the new album represent Lil Nas X’s total journey here, from “places I’ve been to places I want to go.”

Along with the Megan Thee Stallion collaboration, Lil Nas X teamed up with Elton John for “One of Me,” Miley Cyrus for “Am I Dreaming” and Doja Cat for “Scoop” on the album, which also includes his previously released single “Montero (Call Me By Your Name).”

Like any parent, he has a lot of hopes and dreams for his “baby” on the way.

“I hope every single corner of the globe is reached with this album,” he says, before declaring, “It’s going to happen!”