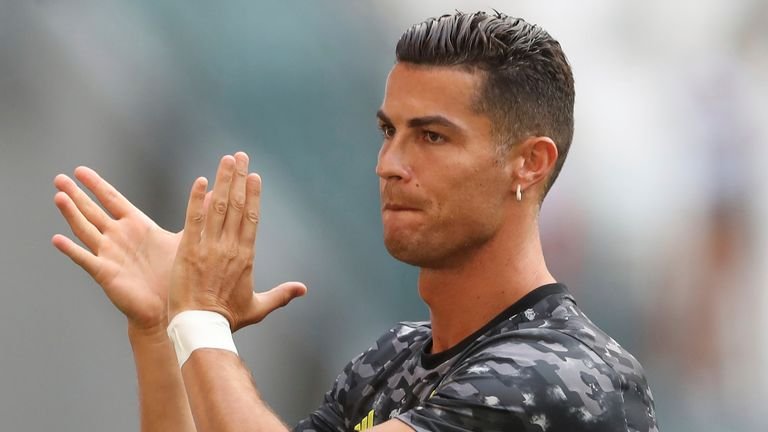 Reports from Italy have it that Juventus striker Cristiano Ronaldo has left the club’s training session on Friday morning amid rumours he has agreed to join Manchester City, Sky Sports reports.

The Premier League club are in talks with the player’s representatives after his agent stated that the client no longer wants to play for Juventus.

It was gathered that Ronaldo was at the Continassa training ground on Friday morning for about an hour as he cleared his locker and said goodbye to the team.

Ronaldo bid his teammates farewell before they took to the pitch for Friday’s training session as he now nears an exit from the club.

He is currently in the final year of his contract with the Old Lady who are asking potential suitors for a transfer fee of about €25m (£21.3m) transfer fee, which could be a major stumbling block along with his £500,000-per-week wages at the Allianz Stadium, talkSPORT claims.

However, no official big has been received for Ronaldo and there is still a long way to go, but a deal could be sealed before the close of the summer transfer window on Thursday.

Sky in Italy are reporting City are willing to offer Ronaldo a two-year contract, with a salary of £12.8m-per-season (€15m).

He was not in City’s plans this summer but he is an option they are considering after the Premier League champions missed out on signing England captain Harry Kane from Tottenham.

According to earlier claims from Pavel Nedved, the vice president of Juve, Ronaldo is happy at the club, but fresh details say he is heading to City.

Further claims have it that the player’s agent Jorge Mendes is expected to arrive at the Etihad Stadium on Friday to finalise discussions with Manchester City officials.

The 36-year-old wants to carry on playing at the highest level for as long as possible, but not everyone at City is convinced the former Manchester United player is what they need.

Ronaldo joined Juventus from Real Madrid in 2018 for a fee in the region of £105m and he has scored 101 goals in 134 games for the club, helping them to two Serie A titles, one Coppa Italia crown and two Italian Super Cups.

Juventus, who want to sell Ronaldo before his contract expires next summer, are in advanced talks to sign Moise Kean from Everton, who scored 17 goals in 41 games while on loan at Paris-Saint Germain last season.