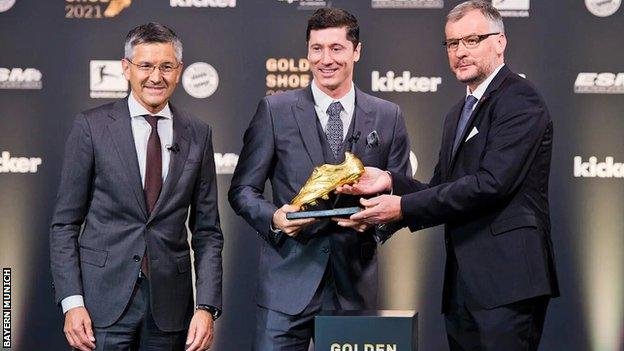 The award is given to the top goalscorer in all domestic leagues across Europe.

Lewandowski, 33, is only the second Germany-based player to win it, after Bayern legend Gerd Muller in 1971-72.

He said: “I dedicate this award to all the people who are by my side every day.”

The Polish striker’s tally last season was the highest since Cristiano Ronaldo claimed the award in 2015 with Real Madrid after netting 48 goals.

The award has been won six times previously by Messi, with Ciro Immobile and Luis Suarez also finishing in top spot.

“I’d like to thank my family, my teammates, the coaching staff and the whole of FC Bayern. I couldn’t win titles like these without their support,” added Lewandowski.

“In sport, like in life, it’s crucial that you value each other, support each other, are always fair with each other and try to be a role model for others. I’m very happy with what we’ve achieved together as a team.”

I would like to thank my family, team mates, coaches and the entire @FCBayern team🙏I am extremely proud of what we have achieved together as a team. Thank you! #GoldenShoe2021 pic.twitter.com/UzECuxSd03

Though last term was particularly exceptional, Lewandowski has long been a lethal finisher, notching 210 league goals in 224 Bundesliga appearances with Bayern to date.

His movement, physicality, nous and composure set him apart from any other striker in Germany and only the presence of Cristiano Ronaldo and Lionel Messi have prevented the Pole winning more individual honors to go with his enormous trophy haul.

His current boss, Julian Nagelsmann, also attended the ceremony and said his striker’s “terrific performance” would be “remembered forever.”

Last season was the sixth in a row in which Lewandowski passed the 20-goal mark in the Bundesliga and, with seven goals in five games already this term, he could be on to surpass his own record this time around.