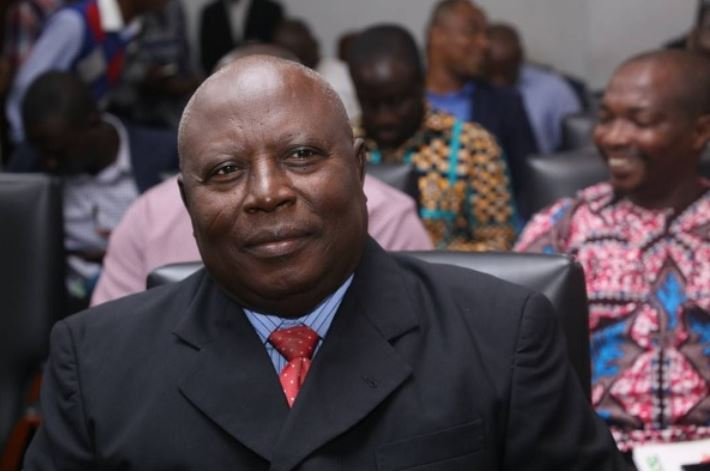 The Special Prosecutor has filed one case in court; 24 others are being investigated by his office which is the President’s promised solution to political graft.

JoyNews search into the work of the office shows there are 25 cases piquing the interest of Martin Amidu, a man with a public record for chasing after ill-gotten funds while a lackadaisical state pussyfoots.

The Special Prosecutor is allowed to seize the initiative by investigating political corruption or receive petitions from citizens. Martin Amidu does both.

His case lists is a mixed bag of suspects of New Patriotic Party (NPP) and National Democratic Congress (NDC) party colours. And it is a fearless mix.

Former President John Mahama who is seeking to be president again, is being sought-after by the Special Prosecutor.

Mahama is named as a respondent a case of alleged diversion of $13m from the E.O Group, a company with a 3.5% interest in Ghana’s 2007 oil find. A claim the former President has rubbished. The allegation was made by Martin Amidu in December 2016 during his days of writing articles that became a source of media stories and political debates.

Four citizens have referred to this article in their petition to him in June 2018, asking Martin Amidu to investigate what he wrote in 2016.

There is also a case of money-laundering against former Gender and Social Protection Minister, Nana Oye Lithur. And another case against another Mahama, (Mahama Ayariga), a former Minister of Information, who is accused of evading tax in the importation of some vehicles.

The governing party’s chairman, Freddie Blay, praised for his role in getting the NPP back to power, is also a subject of interest for the Special Prosecutor after partially fulfilling an expensive promise to get each of the 275 constituencies a mini-bus.

The $11m promise appealed to delegates and got him re-elected. But it set tongues wagging with accusations of vote-buying and questions about how the GNPC Board chairman could pull off such a deal that included funding from some banks.

Former Chief Executive of the Bulk Oil Storage and Transport (BOST) Alfred Obeng Boateng who has been fingered in the decision to sell 1.8m barrels of crude oil at a discounted price which allegedly cost the nation 30m cedis in revenue is also of interest.

And there is the case against the wife of Assin Central NPP MP and tough-talker Kennedy Agyapong who is a beneficiary of a $100 million sole-sourced contract.

The case filed in court involves Bawku Central MP Mahama Ayariga and the procurement of ambulances.

No lawyers have been recruited yet, a human resource crisis that underlines the office’s slow pace of work and fast-growing public criticism.

Take IMANI Vice-President Kofi Bentil who is frustrated that the BOST petition to the Special Prosecutor in March 2018 is still unresolved after 14 months.

“It is not difficult for an investigation even within a year to determine all the facts …to come to a certain conclusion”, he was reported as saying on JoyNews programme Newsfile.

And Kofi Bentil is not alone. The Dean of Studies and Research at the Institute of Local Government Studies, Dr Oduro Osae, waiving his option to be measured, stated categorically, “the Special Prosecutor has failed us.”

Months after the March 1, 2018 swearing in of Martin Amidu, they feel he has not been on the march.

But one person not shocked by the rate of work by the Special Prosecutor is NDC General Secretary Johnson Asiedu Nketia. As Ghanaians entered the new year in 2019, he declared his ‘prophesy’ had come to pass.

That one year after Martin Amidu was appointed, he would come under criticism for ‘doing nothing’.

While Martin Amidu seeks to file more cases. There is one case against him at the Supreme Court where the 66-year old lawyer is branded as unfit for office as he is past the statutory retirement age of 60. 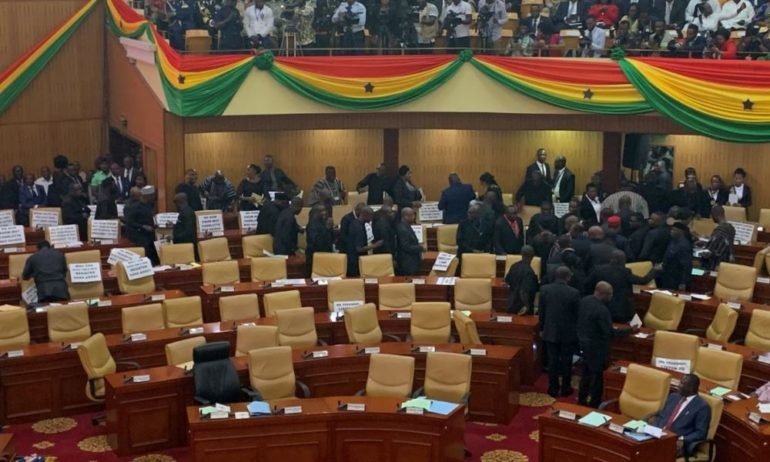 The Minority in Parliament on Thursday, February 20, 2020, staged a walkout of the Parliament house after President Nana Akufo-Addo entered the main chamber to address the legislative arm of Government on the state of the nation as demanded by the constitution.

There have been walkouts staged by previous minorities including the NPP on different issues but this one is the first time in the history of Ghana’s politics any side has boycotted a SONA address by a president.

Cladded in all black, they waved placard with the inscription “Free and fair election is not negotiable” while others chanted “bye bye ooo, bye bye ooo” to show their disappointment in the president as they took they are exited the parliament house. 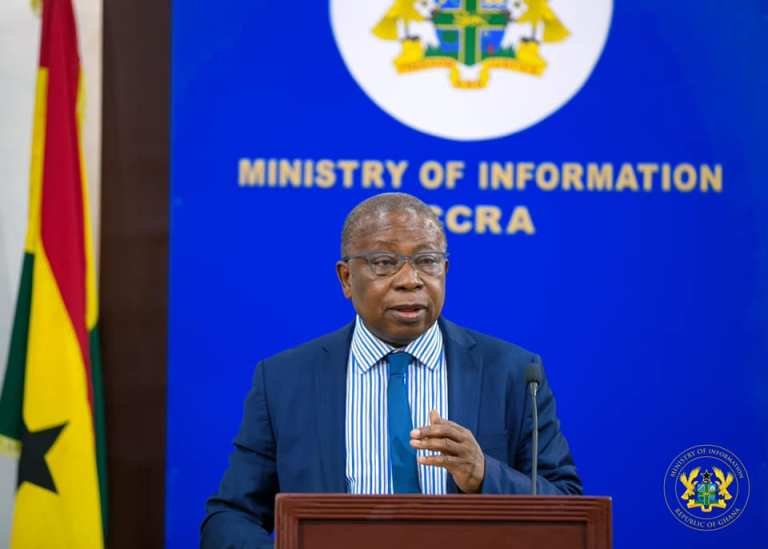 The Minister for Health, Kwaku Agyemang Manu has announced that the government is ever ready to shiploads of Ghanaian staple foods like “shito, gari and kenkey that can last over 2 weeks without going bad”, to the over 300 Ghanaian students who have been trapped in the Chinese province of Wuhan after the outbreak of the Coronavirus disease.

The decision of the government comes after the advice by the Ghana Health Service to the Health Ministry that shipping stranded students into the country “is not an option for now”, despite calls by the students through the China chapter of the National Union of Ghana Students for government to evacuate them from China.

Speaking in an interview on Okay FM, Mr Agyemang Manu said, “ Ayorkor (Foreign Affairs Minister) was angry that, when she sent people to buy the shito, they came back to say one bottle costs GHC 80, so she won’t buy that shito, but would personally go to market to buy some at a cheaper price; so we are thinking of them; day by day we are talking with them”.

First Ambulance Commissioned By Akuffo Addo Involved In An Accident 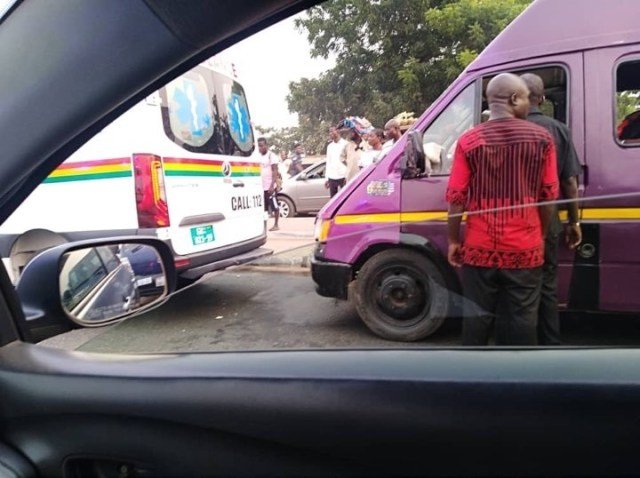 One of the newly commissioned ambulances of President Akuffo Addo just got involved in an accident in Accra.

A social media user who was at the scene took to Facebook to recount how the accident occurred.

Sharing a photo from the scene in a popular Facebook group, Tell It All, he wrote;

“So this trotro driver hit one of the ambulances that was commissioned today? Ok, let me drink my water and come wai”. 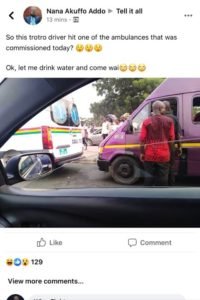 Sharing photos from a special ceremony, he wrote;

“On Tuesday, 28th January, 2020, I commissioned and presented 307 brand new, state-of-the-art ambulances, fitted with advanced life support equipment and tracking devices, to be distributed to 275 constituencies, i.e. 1-Constituency-1-Ambulance, to be managed by the National Ambulance Service, and the remainder of 32 ambulances to the headquarters of the Service. This is the single largest presentation of ambulances made to the Ghana Ambulance Service, since its establishment in 2004.