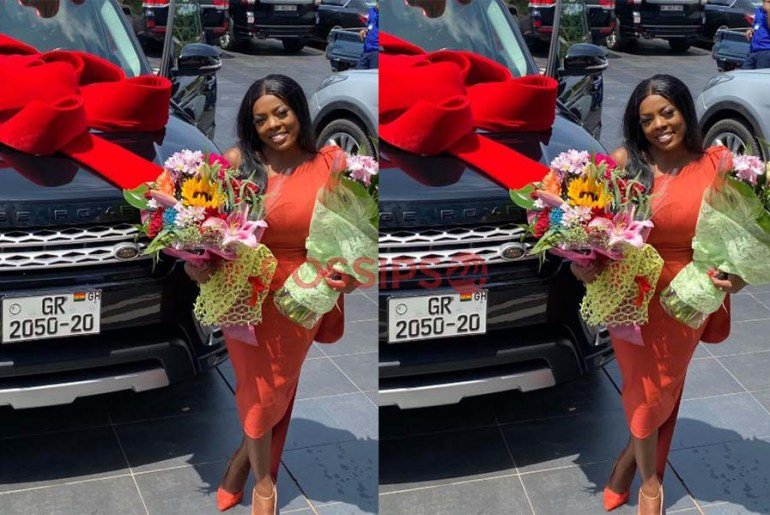 Media personality, Nana Aba Anamoah celebrated her 42nd birthday and to climax her birthday celebration, she was surprised with a brand new Range Rover.

Immediately after receiving her birthday present, it came to light that her gift of the Range Rover was fake; the number plate of her Range Rover was that of the registered Nissan Rogue.

According to the documents, the owner of the number plate is Richard Ansah who lives in Tema Community 2. The car was imported by an agent who has also been identified as Seth Atta.

The documents also indicate that the car, Nissan Rogue whose number plate is on the so-called range rover, is white in color and was registered on 3rd January 2020.

Deputy Chief Executive Officer of DVLA, Prince Opoku Edusei speaking on the brouhaha stated that there is no way the DVLA will register different cars with the same numbers.

He revealed that the DVLA has conducted its own investigations and has come to the realization that the car that bears that number which is Nana Aba’s Range Rover is not in their system and it’s not registered in Ghana.

“In every situation there only the truth and the lie. There’s no way DVLA will register two vehicles with the same number. We’ve conducted our own investigations and realized that the vehicle that bears that number, one of them which is a black Range Rover, I’m not sure whether It’s hers or not but that vehicle is not a registered vehicle in this country the plate on that vehicle is not an authorized or a plate that was issued by the DVLA. he said.

“We’ve requested the Police to go into. We have done our own investigation and we’ve realized that that is not a legally licensed vehicle so we’ve asked for further investigations and I’m sure that another statement will come out to that effect and you’ll get to know what the DVLA is doing about it,” he added.

READ ALSO; M.anifest And Sarkodie Releases First Song After Beefing Each Other, See How Ghana Is Reacting To It