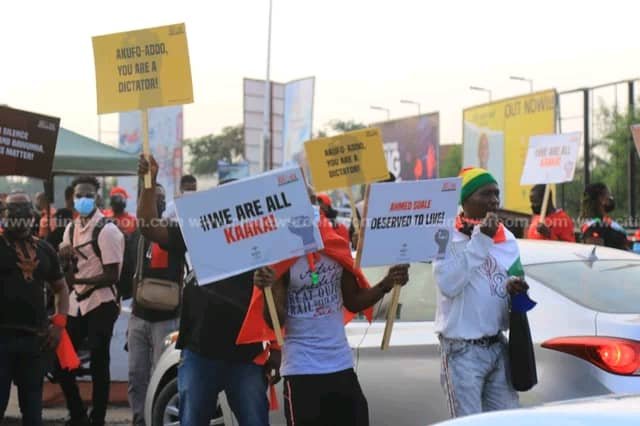 Protesters taking part in the ‘March For Justice’ demonstration have referred to President Nana Addo Dankwa Akufo-Addo as a dictator.

Held on Tuesday, July 6, 2021, the demo organized by the Youth wing of Ghana’s leading opposition party, the National Democratic Congress (NDC) seeks to ‘demand justice for people killed or brutalized by security personnel in the past few weeks’ per a statement.

The protesters showcased several placards decrying the poor state of security in Ghana, accusing the president of the lapses.

“The killing of innocent Ghanaians just to put fears in their hearts will be resisted,” reads one of the placards.

Thousands of members and sympathizers of the opposition Democratic Congress, NDC, earlier on gathered at the Accra Mall to begin a protest march over the killing and brutalization of some citizens by various security agencies in the country.

The supporters, most of whom are clad in red and black, are were gathered and standing in clusters as they waited for the protest top officially start.

Many were seen holding placards with various inscriptions including, “Ahmed Suale deserved to live, No justice for the dead, no peace, #WeAreAllKaaka, We feel your silence Akufo-Addo and Bawumia, Ghanaian lives matter” among others.

Some protestors arrived at the grounds as early as 5:00am.

Meanwhile, there is heavy security presence to ensure law and order during the protest march.

The demonstration would culminate in presenting a petition to President Nana Addo Dankwa Akufo-Addo, Alban Kingsford Sumana Bagbin, the Speaker of Parliament and the Inspector General of Police, James Oppong-Boanuh.

See the photos below;

Share with Friends:
Related Topics:'March For Justice'FeaturedNDCNPPPresident Nana Akufo-Addo
Up Next

[VIDEO] Fire Sweeps Through Some Buildings at Makola Market