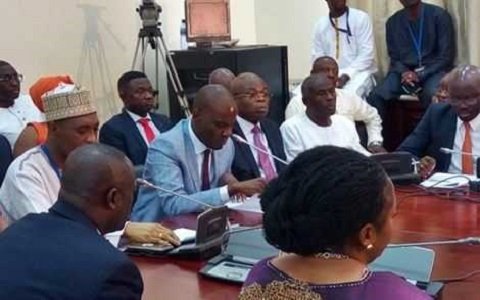 The Minority in Parliament has called on President Nana Addo Dankwa Akufo-Addo to “show leadership” in what they describe as rising insecurity in the country.

The call comes on the back of the rise in killings, the recent being the killing of an investigative journalist with Anas Aremeyaw Anas’ Tiger Eye PI, Ahmed Hussein-Suale.

They have also called on the President to condemn the conduct of the Member of Parliament (MP) for Assin Central, Mr Kennedy Agyapong, whom they believe incited violence against the late Ahmed following the premiere of #Number12.

At a press conference in Accra on Monday, the MP for Builsa North, Mr James Agalga, expressed disappointment in the act that has received international condemnation from world bodies including the United Nations and questioned why the Police Service has not arrested Mr Agyapong.

“Mr. Agyapong should have promptly been arrested and prosecuted for the public instigation of violence on the two men. This was never done. Sadly, in this case, Ahmed was shot dead in cold blood. One cannot help but point to Mr Agyapong’s express and televised instigation of the public to visit violence on Ahmed for monetary reward.

“Shockingly, Mr. Agyapong was allowed to fly out of the country, without being apprehended, on that very day on an Emirates flight headed to Dubai and possible onward journey. The conduct of Mr. Agyapong could not have escaped the notice of law enforcement agencies and the government of President Akufo-Addo. And till date, he has not been invited by the Police for questioning. We find this situation deeply worrying and uncharacteristic of a democratic and civilized country.

“Nevertheless, we call on the law enforcement agencies to promptly cause Mr. Agyapong’s arrest and prosecute him for his actions.”

“Chillingly, the government of Nana Akufo-Addo is dead silent on the matter and has watched on as Mr. Agyapong makes nonsense of the laws of Ghana. This cannot be allowed to continue. Nana Addo must show leadership,” Mr Agalga added.

Below is the full statement;

The Minority in Parliament is grateful to you for honouring our invitation. May we afford this opportunity to wish you and the larger Ghanaian populace a happy new year even though the year has not begun on a happy note.

On the night of Wednesday 16th January, 2019, Ahmed Hussien-Suale, who was driving in Madina close to his family house, was shot three times by two men on a motorbike who pulled alongside his car. He died almost instantly. He was only 33 years.

Ahmed was a member of Tiger Eye P.I., headed by the celebrated and internationally acclaimed investigative journalist, Mr. Anas Aremeyaw Anas. Ahmed was a lead investigator in the latest work of Tiger Eye P.I titled “Number 12 – When Greed and Corruption Become the Norm”. The documentary investigated corruption into African Football with greater focus on Ghana.

Ahmed was assigned to specifically investigate Former Ghana Football Association President, Mr. Kwesi Nyantakyi. The undercover report led to a lifetime ban from all football related activities imposed on Mr. Kwasi Nyantakyi by the Adjudicatory Chamber of the Independent Ethics Committee of FIFA. It also led to the dissolution of the GFA and the sanctioning of several football officials across the African continent.

Ahmed was also part of the BBC team of journalists that investigated the selling of human parts in Malawi – an investigation that nearly got Anas Aremeyaw Anas and his team killed as residents of a suburb in that country mistook them for ritual killers.

The Minority hereby condemns in the strongest possible terms the barbaric slaying of the young and budding undercover journalist.

Our heartfelt condolences to his immediate family, his colleagues at Tiger Eye P.I. and the entire media fraternity home and abroad.

This cold-blooded killing of Hussein-Suale is undoubtedly a catastrophic attack on press freedom and free expression in Ghana.

Nevertheless, we appeal to the media in Ghana not to be intimidated or cowed by the dastardly act. A befitting tribute to Ahmed Hussein-Suale would be a resolve to become even more courageous and selfless in exposing the ills of society and those who perpetrate them.

Ladies and Gentlemen, perhaps never in the history of Ghana have we attracted such an avalanche of negative international media coverage. Indisputably, our international image is currently in tatters.

The global media from the BBC, CNN, VOA, RFI, Aljazeera, Africa News, Reuters, Associated Press, Washington Post, The Guardian, New York Times and a whole host of others have all been unanimous in highlighting this brutal killing that has soiled Ghana’s human rights record.

In the same vein, virtually every reputable local and international organization have ensured their voices have been loud and clear in condemnation. Some of these are:

Notable personalities such as former presidents J.J. Rawlings and J.D. Mahama have been decisive in their condemnation.

We recall that upon the advertisement by Tiger Eye P.I. of the airing of the documentary entitled – “Number 12 – When Greed and Corruption Become the Norm” – the NPP Member of Parliament for Assin Central Constituency, Kennedy Ohene Agyapong, commenced a tirade against Mr. Anas in particular and his Tiger Eye P.I. team members. Mr. Agyapong vowed to destroy Mr. Anas and his team if they dared to air the documentary. Mr. Anas called off Mr. Agyapong’s bluff and proceeded to air the documentary in various locations in Ghana and on local and international media.

Mr. Agyapong then went further and splashed pictures purporting to be the image of Anas on Net 2 TV (which he owns) and on the Internet and, also invited the general public to cause harm to Mr. Anas for monetary compensation.

Further, Mr. Agyapong splashed pictures known to be the image and likeness of Ahmed in like manner and incited the public to visit violence on Ahmed for monetary reward. Indeed, Mr. Agyapong declared that he was prepared to pay any member of the public who would beat up Ahmed. Mr. Agyapong then proceeded to indicate the location of Ahmed’s residence.

Mr. Agyapong appears to have abetted several offences ranging from assault, causing harm, causing harm with the use of an offensive weapon, attempted murder and murder by instigating the public by reaching out to the public to visit the indicated violence on them. And by the operation of our law, the offence of abetting a crime through instigating violence is committed even if no member of the public lifts a finger in furtherance of the invitation.

Mr. Agyapong should have promptly been arrested and prosecuted for the public instigation of violence on the two men. This was never done.

Sadly, in this case, Ahmed was shot dead in cold blood. One cannot help but point to Mr. Agyapong’s express and televised instigation of the public to visit violence on Ahmed for monetary reward.

And in a public show of impunity and bravado the morning immediately following Ahmed’s assassination, Mr. Agyapong went from one radio station to another daring law enforcement agencies to arrest him. He went to the extent of preposterously accusing Mr. Anas and the lawyer for Tiger Eye P.I. of complicity in Ahmed’s death while raining insults and invectives on them.

Shockingly, Mr. Agyapong was allowed to fly out of the country, without being apprehended, on that very day on an Emirates flight headed to Dubai and possible onward journey.

The conduct of Mr. Agyapong could not have escaped the notice of law enforcement agencies and the government of President Akufo-Addo. And till date, he has not been invited by the Police for questioning. We find this situation deeply worrying and uncharacteristic of a democratic and civilized country. Mr. Agyapong’s conduct and the obvious lack of action by the law enforcement agencies leads to only one conclusion – that Mr. Agyapong is above the laws of Ghana and he enjoys impunity free from prosecution. Chillingly, the government of Nana Akufo-Addo is dead silent on the matter and has watched on as Mr. Agyapong makes nonsense of the laws of Ghana. This cannot be allowed to continue. Nana Addo must show leadership.

Nevertheless, we call on the law enforcement agencies to promptly cause Mr. Agyapong’s arrest and prosecute him for his actions. We also call on Nana Akufo-Addo’s government to roundly condemn the conduct of Mr. Agyapong.

The Minority wishes to stress that it is most embarrassing that Kennedy Agyapong has been allowed to run amok all these years with Parliament and State institutions doing absolutely nothing about his misconduct and reckless utterances only for a US Congressman, Henry C. Hank Johnson, Jr. to demand action from the US State Department. We hereby declare our full support for any sanctions on Kennedy Agyapong as the US Government may deem fit.

That notwithstanding, we would like to serve notice that when the House resumes from recess, the Minority shall commence processes to drag Kennedy Agyapong before the Privileges Committee for sanctions.

The Minority also expects investigations to be broadened to ensure that all the perpetrators of this atrocious crime are brought to justice.

We must caution Government against treating this matter like earlier investigations that have been shabbily handled with their outcomes remaining what is at best a mystery. Ghanaians and the international community would not accept that. We insist that the Akufo-Addo administration must sharply depart from the inglorious examples it set in the BOST Scandal, the Deputy Chiefs of Staff Allegations, the Australia Visa Scandal and ironically, the Anas Number 12 investigations.

May Allah keep the soul of Mr. Ahmed Hussien-Suale and give peace to his family.

On New Year’s Eve, Joseph Migal Jinjer, a senior staff of the Ghana Water Company Limited whilst on his way to celebrate the New Year at his hometown in the Bunkpurugu District was pulled out of his cross country vehicle and shot dead by unknown assailants.

Furthermore, the Marketing and Public Affairs Manager of the Ghana Ports and Habours Authority (GPHA) in charge of Tema Port, Josephine Asante was stabbed to death at her residence in Tema, Community 25 on Saturday the 12th of January, 2019.

A noticeable trend about all the murders alluded to is that the assailants never made away with or stole any property belonging to their victims. In the circumstance, reasonable minds ought to conclude that the killings recorded in recent times are “Contract Killings”.

Ladies and gentlemen of the media, ever since President Akufo-Addo became President, the security situation in the country has become very porous to the extent that Ghanaians are now living in perpetual fear.

For instance, according to statistics from the Ghana Police Service, incidents of robbery cases recorded at the end of the year 2017 were 1,772 as compared to 1,397 in 2016. This figure represents a 27% increase. The situation did not improve in 2018 as robbery cases alone hit 968 in the 1st quarter.

Given the difficult times, we find ourselves as a country with regards to the management of our security, we call on the President as the Commander-In-Chief of our Armed Forces and the Chairman of the National Security Council to put in place measures to stem the alarming incidents of contract killings and robberies in the country. Such measures should include an assurance and concrete interventions from the President that will rid our country of the growing sense of insecurity.

May God Bless and Help Ghana

Thank you for your attention.