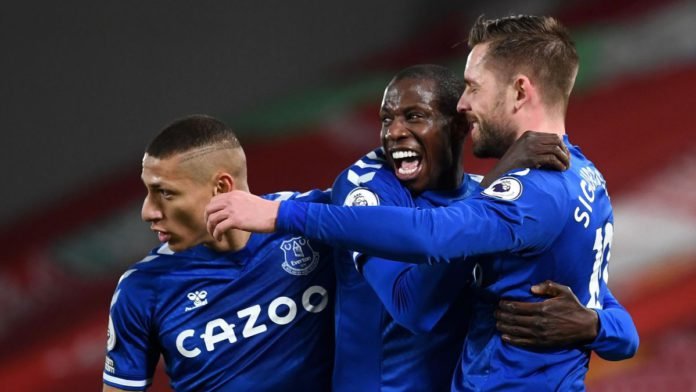 Everton have broken their 22-year hoodoo at Anfield, winning 2-0 thanks to Richarlison’s early strike and Gylfi Sigurdsson’s late penalty.

The Brazilian striker was played in by a perfect through ball from James Rodriguez and struck home firmly past Alisson.

In between the goals Liverpool had the lion’s share of possession and forced some fine stops from Jordan Pickford but again failed to create clear openings.

The game was put beyond doubt when Sigurdsson calmly hit home after fellow substitute Dominic Calvert-Lewin was felled inadvertently in the area by Trent Alexander-Arnold, who had chased his fellow England international half the length of the field before falling to the floor after Alisson had saved the striker’s effort.

Everton are now level with their sixth-placed rivals on points, whose misery was compounded by skipper Jordan Henderson going off with a left leg injury in the first half.