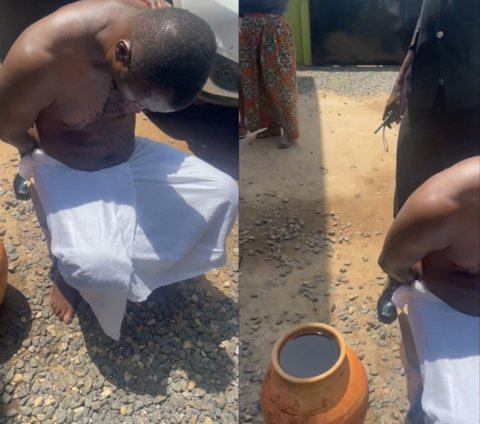 A video that is currently trending on the local digital space captures the moment a father was arrested for allegedly trying to use his own daughter for money rituals.

Apparently, the man was nabbed by the police after the native doctor he went to consult gave a tip-off to the security service who sent personnel to storm his compound after receiving his call.

According to the native doctor, the arrested father claims he’s financially unstable abroad so he came to him for money rituals but unfortunately, he’s not into such evil deeds hence the need to call the police on him.

The native doctor additionally revealed in the circulating video that the man’s daughter was in school but he went and dragged her to his place just because of the mone rituals.

It has also been reported that the notorious father claims to have 12 children, therefore, using just two as sacrifices to gain financial freedom isn’t a big deal for him.

This is the main reason he was eager to give his beautiful and innocent daughter to the gods for his own greed.

NSS Personnel Protest In Demand Of Their Unpaid Monthly Allowance