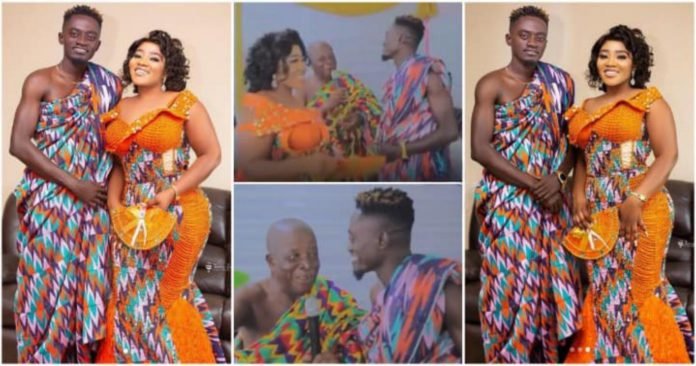 Kwadwo Nkansah popularly known as Lil Win has dropped photos from his private marriage to his American-based mother of his children, Maame Serwaa.

With few family members and loved ones gracing the occasion, the kumawood actor and his baby mama tied the knot in an exclusive traditional marriage this year.

The couple rocked rich and colourful Kente for their ceremony.

Lil Win shared video and photos of the ceremony on his Instagram page with the caption: “Things change. And friends leave. Life doesn’t stop for anybody. I taught I had lost it all but you brought back my Joy. For love, trust and care …. I promise to love you more
God bless you

This was alleged by a lady who claimed to be a family friend to the actor’s ex-wife. However, Lilwin ex-wife Patricia also came out to break her silence on the matter.

According to her, she’s mad as the lady in the video claimed. She stressed that she is very health and okay has never gone mad or whatsoever.

In an interview with Ghpage tv, monitored by Enewsghana.com, Pat stated that all what Florence said were false because she is not mad nor does she use hard drugs.

Pat’s mother, who was also present during the interview, urged Ghanaians to ignore rumours that Lilwin used juju on her daughter.