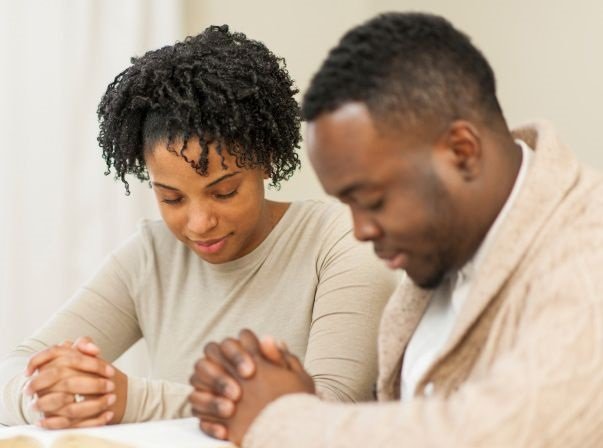 
(adsbygoogle = window.adsbygoogle || []).push({});
It is important for guys to figure out the right girl to marry. Unplanned marriages eventually fall on the rocks if the partners involved fail to spot hidden negatives characters in their lovers (girlfriend and boyfriend) during the stage of courtship. It is unwise to rush to tie the knot with your girlfriend without knowing her character. The following are some signs that you have met the right girl to marry

Personally, I prefer ladies who are hustlers in whatever they do. A good girlfriend should be passionate to succeed in life.  Irrespective of the academic qualifications a woman has attained, it isn’t conclusive that she would make a good wife material. The fact is that some ladies with strong educational backgrounds tend to be consumed by pride. If you are a man who prefers highly educated girls, please upgrade your qualifications to be a bit higher than that of your partner. The fear is that, later on, it might be difficult to distinguish who has married who. Lol

Mind you, men have a taste for good-looking girls. Physical appearance is the number one feature that sells a woman to her potential boyfriend. No girl should ever trust guys who say they don’t mind about beauty when choosing a girlfriend. To me, beauty is a character. I won’t be surprised if my affection for beauty stems from my poor physique? LMAO! Anyway, that is understandable. If a man isn’t gifted in looks, it is better he marries a beautiful girl, except that he wants to give birth to his own type. In our modern society, no girl has an excuse to be ugly. Science has manufactured a lot of cosmetics for ladies to enhance their looks. However, naturally beautiful ladies who use a lot of make-ups eventually lose their beauty.

Read Also  The Right Time to Marry Your Girlfriend

Actually, this should have been the first point. Rude girls are a complete turn-off for many men. A man is a symbol of honor, so they value respect more than beauty. Marriage extends its branches to all members of the extended and nuclear family systems, so men seek to marry women who know to appropriately interact with their parents. A good girlfriend should also be caring.

Nothing bores a man other than a girlfriend who doesn’t accept her mistakes. Men see it as pride when they point out a girl’s mistakes, but she keeps denying her wrongdoings. In the same vein, every man expects his girlfriend to accept and forgive him when he goes wrong.

Girlfriends today have grown an insatiable desire for money. It is good to be money-loving, but don’t be over demanding and expect your boyfriend to be your source of income. It is ok if a girl occasionally asks for money from her boyfriend, but it shouldn’t be habitual. Don’t use your boyfriend to feed your family. Your boyfriend equally has his own family financial troubles to sort out. It is very easy for boys to dump an overly expensive girlfriend.

A good girlfriend sticks to her broke boyfriend.  I have a saying that, “Instead of looking for someone with future, why can’t you create a future with someone?” There is no need to be cheating on your broke boyfriend with sugar daddies. If you don’t believe in his future, just leave him alone in peace.

Few men would want to keep a blabbermouth as a wife. A good girl shouldn’t go about disclosing the weaknesses of her man to her friends. How will they respect him, apart from their temptation to nickname him? It is demeaning, never betray your better-half.

Finally, there are other qualities of good girlfriends not listed here. We would reserve that for part two of this write-up. 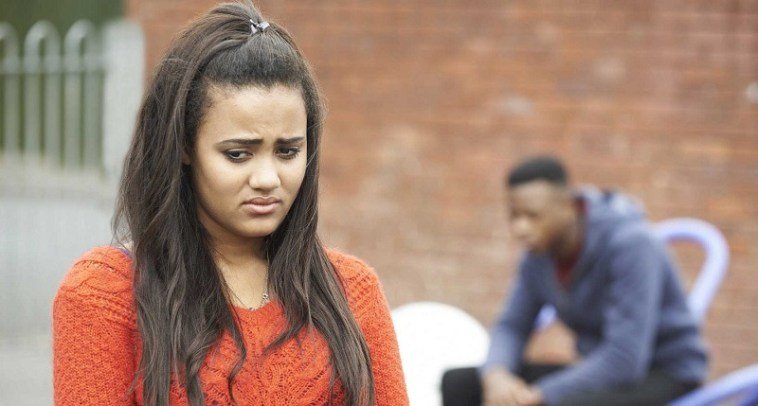 Whenever people find themselves in a toxic relationship, it becomes difficult for them to step out of it. sometimes, the just don’t know how to leave and as a result decide to stay and suffer.

Instead of waiting for your partner to get angry before asking for a breakup, below are 5 easy ways to get things done.

1.   Check the length of the relationship

It is a different case when the relationship had only been for a couple of months, but when it is the type which has lasted for more than a year, then be careful about it. It should be a face to face process because it will help in their healing and also make them respect you. Your kindness and understanding will be noticed.

It is difficult to walk away from a relationship especially when your partner is asking for another chance. However, in order to make them understand the situation, be kind as possible and make it clear.

You can tell them you are probably not a good fit for them or you want to focus on your career or something very important.

Another thing you should do is time when to ask for the breakup. It is mostly bad when people wait for their partner to get them angry or rather angry before asking for the breakup.

However, as said earlier, be kind and sweet when asking for a breakup. Don’t make them anxious about it, be prepared to take full responsibilities too for the breakup.

Don’t call for argument, the best approach in breaking up is first acknowledging their feelings before rushing. Make it as clear as you can and in case they try to stop you, stay firm to the decision.

You won’t be happy if someone wanted a breakup with you therefore before breaking up, put yourself in their shoes, and look for the best possible way to end things.

Lady Vows Never To Svck D!ck Again After Her Sugar Daddy Urinated In Her Mouth 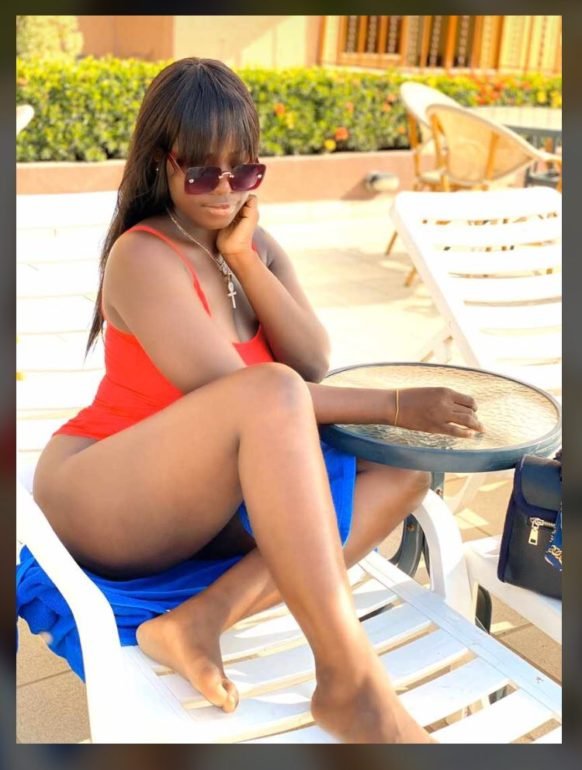 An angry lady has vowed never to give any man a BJ after her sugar daddy urinated into her mouth as she was in the act.

According to the lady who is identified as Dede, she was happily giving BJ to her sugar daddy as they were being intimate during the lockdown yesterday the 13th of April 2020 but in excitement, he urinated into her mouth.

Sharing the regrettable experience on social media, she angrily tweeted; 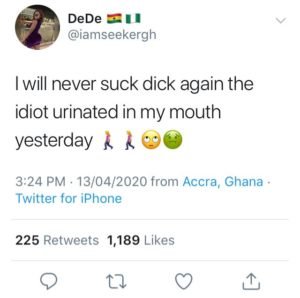 Have you ever had such experience during s3x? Kindly share it below.