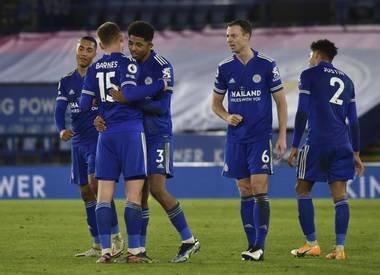 Goals from Wilfred Ndidi and James Maddison seal all three points; one win in five in the league for Frank Lampard and Chelsea, who stay eighth after lacklustre display.

Brendan Rodgers’ side got off to the perfect start when Wilfred Ndidi’s strike gave them the lead in the sixth minute.

Chelsea thought they had been given a route back into the game when referee Craig Pawson adjudged Jonny Evans to have fouled Christian Pulisic inside the penalty area.

However, VAR intervened and overturned the decision, awarding the visitors a free-kick right on the edge.

But the German strayed into an offside position as Leicester kept their clean sheet intact.

It was a comfortable night for Leicester, who move one point above Manchester United having played a game more.

Meanwhile, it’s more disappointment for Frank Lampard as his side stay eighth.