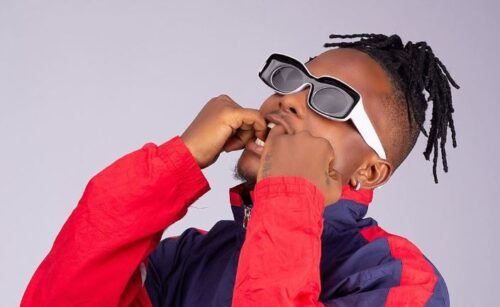 Award-winning Afrobeat artiste, Kelvyn Boy, has been involved in a minor accident which resulted in him scratching someone’s car with his brand new Range Rover.

The incident occurred on one of the busy roads in Accra Friday, September 18, 2020.

In the video, Kelvyn Boy is seen telling the other driver to calm down because he will ensure that the dent on both cars are fixed.

Kelvyn Boy is heard trying to cool down the other driver. He also tried to narrate how the incident happened, saying it was a misunderstanding on the part of both drivers but he will see to it that both cars are fixed.

However, the owner of the other car the Afrobeat artiste scratched appeared pissed and threatened to deal with the young singer.

But Kelvyn Boy calmly told the man to keep it cool because the issue will be resolved amicably.

Meanwhile, police personnel present at the scene were also seen calming the other driver down as they were happy that Kelvyn Boy was ready to take responsibility for what had happened and fix both cars.

Kelvyn Boy’s Range Rover with a custom-made number plate ‘ANADA 1’ appeared to have sustained a few scratches while the other car is seen to have some major dents on it.

Read Also:  I Will Rather Pray For Myself Than Talking About Ghana - Vim Lady Discloses

‘I Am Not Too Keen On Religion’- Muntari’s Wife Talks About Religion, Marriage And Their Kids