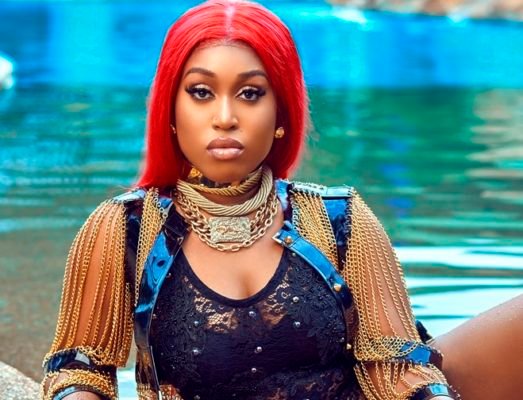 She hasn’t been in the music industry for long, in fact it’s been about just two months since she released her first single So What, but Afrobeats artiste Fantana has already received her share of the baptism of fire new artistes experience.

Signed onto Bullet’s Rufftown Records, Fantana has been bashed for trying to be like the late Ebony and not too long after that, she was in the news about being an ex-convict.

While there are some industry players who think it is too early to subject the singer to such stress, she has told Graphic Showbiz that she’s got thick skin for the industry she’s found herself in.

“Before you come into any industry, you have to be aware of all the things it comes with and that is exactly what I did. It took me sometime to finally settle in Ghana and decide that it was music I wanted to do. I know what I have gotten myself into and I am ready for it.

“Again, I am one person who does not allow things to get to me; I have thick skin against negative things, we are human and some things may get to me at a point but not to the extent where it will make me cry, quit music or give up. I am ready for the bashing,” she said.

Fantana added that, “I also know that not everyone will like or love what I do but that does not mean I will not be myself or do my best, I will. I am in to stay and make an impact and there is no way I will let anything stop me.

“Even Beyonce has people who do not like her, it’s the same with the President as well so you need to be strong so nothing gets to you.”

Fantana also denied rumours that her song, So What, belonged to the late Ebony which Bullet gave to her.

“Not at all, we wrote the song in the car. I was with him, we were just playing the beat and Bullet was like, write the lyrics on your phone, which I did and quickly we went into the studio to record,” she explained.

One noticeable thing about her is her deep voice, and although she revealed she had been mocked for it, Fantana said she was proud of it.

“I used to get people laughing at me that I have a frog’s voice but I believe it is beautiful. In the industry, there are people with such voices who are doing well like Toni Braxton, Becca etc. and so I’m good with what I have,” she said.

Contrary to the impression that female artistes were catty and did not support one another, Fantana said she had received a lot of love since her arrival on the scene, with acts like Sefa, Efya and Sister Afia all expressing support for her.

She attributed it to God and being real, saying: “It has to be God and the fact that I am me. Again I am sure they have seen what I am capable of and I’ve got what it takes, hence the love so far.”

Twenty-two-year-old Fantana, real name Francine Nyanko Koffi, described herself as a go-getter and she asked music lovers to look forward to great tunes and great collaborations from her.

Kumasi will have a Film Village – Creative Arts Council