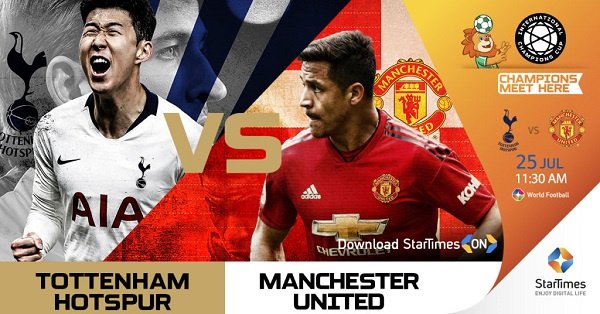 When Manchester United take on Premier League rivals Tottenham Hotspur, fans can expect fireworks. And it won’t be any different this Thursday as The Reds face Spurs in an International Champions Cup match played in the 33,000-seater Hongkou Stadium in Shanghai.

Although it seems likely that both teams will field some inexperienced – and unfamiliar – names, Chinese football fans are bound to be in for a treat when the two giants of the Premier League meet.

Both teams go into their game on the back of victories in their first game, Manchester United beat Inter Milan 1-0 in Singapore on Saturday, while Harry Kane scored practically from the half-way line three minutes into injury time to give Spurs a morale-boosting 3-2 win against the Serie A champions Juventus.

Between them, the five players have less than three dozen Premier League appearances between them, but they did not disappoint, as Spurs picked up the three points against Juventus.

United coach Ole Gunnar Solskjaer went even one step further, beginning the match against Inter with a mix of experience and inexperienced players, but then substituting all 11 players in the second half.

Particularly impressive for United against Inter was their 50 million Pound signing Aaron Wan-Bissaka, who had a man-of-the-match performance in only his third game for United since joining them from Crystal Palace.

Team-mate Scott McTominay, said the 21-year-old defender has fitted in well into the team. “He’s just like one of the boys and it’s nice to have him around as well. He’s another big player that’s going to be a great addition to the squad.

“It takes time to come to a new team and adapt but he’s settled in straightaway.”

The Scottish international said they were now looking forward to facing Spurs. “We had some really good games with Tottenham last season and in pre-season you want to stamp your authority from the [word] go.

“You want to go up against them and show them that we’re here for the season ahead and they’re going to have to match us.”

My next job won’t be in Africa – Herve Renard