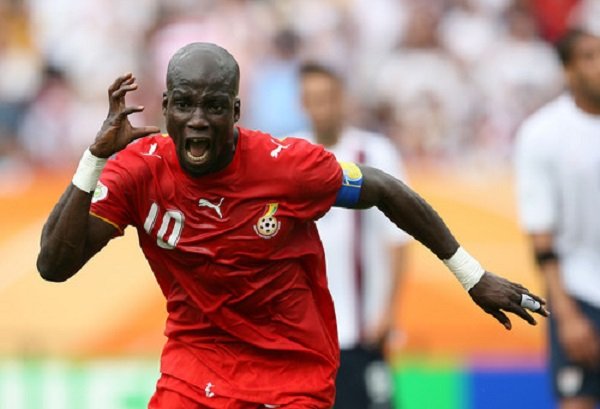 Former Ghana captain Stephen Appiah has revealed that he “lost five kilos” as he stood behind the ball to take the Black Stars’ first-ever penalty at a World Cup some 15 years ago.

Appiah, who works as a pundit for Euro 2020 on Joy Prime, revealed on the show the weight he carried at that moment and what was running through his mind as he prepared to take the penalty, which he eventually scored.

“It’s always difficult to take penalties,” he started. “Against USA, we were down 1-0 and Haminu Dramani equalised and a minute to half time, we got a penalty and I have to take it and it was very very difficult,” added Appiah.

“This is a situation everybody is looking at you when you think back home, Ghanaians, the streets, the family and you don’t have to think about anything to put that ball in,” he continued.

Appiah had his eyes fixed on the ball before he majestically sent the American goalkeeper Kasey Keller the wrong way with the ball in the net, but admits he instant lost five kilos.

15 years ago today, @StephenAppiah scored a penalty that sent Ghana into the 2006 WC Round of 16.

Here he is today, revealing the weight of expectation when he stood behind the ball. #Legendpic.twitter.com/KF1sKATIs5

“I lost five kilos at that spot,” Appiah jokingly added on Joy Prime.

Haminu Dramani scored the opener after 22 minutes before Demarcus Beasley leveled in the 43rd minute and a minute later, Appiah scored the winner from the penalty spot.