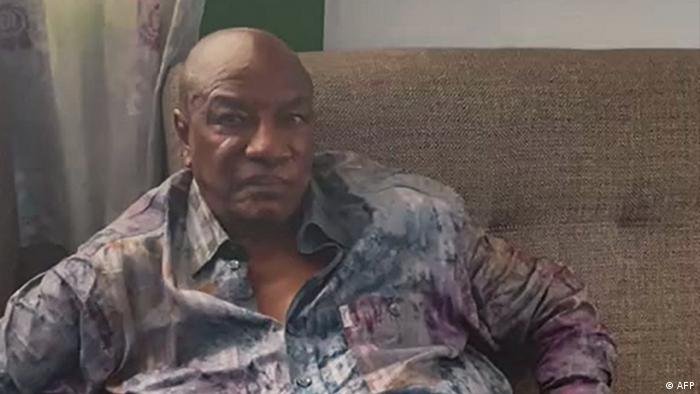 Mutinous soldiers in Guinea have detained President Alpha Conde, declaring on state television that the government had been dissolved in a coup.

They also announced a nationwide curfew “until further notice.”

“We have dissolved government and institutions,” Doumbouya — a former French foreign legionnaire — announced on television, draped in Guinea’s national flag and surrounded by eight other armed soldiers.

“We are going to rewrite a constitution together,” he said, adding that his forces have also closed Guinea’s land and air borders, and that a transitional government will soon be formed.

“The personalization of political life is over. We will no longer entrust politics to one man. We will entrust it to the people,” Doumboya said.

Gunfire rang out near the presidential palace in the Guinean capital of Conakry, following reports of an attempted coup, witnesses told Reuters and several other news agencies. At least two people sustained injuries.

The shots were fired in the Kaloum peninsula area of the capital, which is home not only to the presidential palace, but other government institutions and ministries.

A source in the presidential palace told DW that the president was detained by special forces. Yet, the source added that the soldiers staging the coup are only a small group, with the rest of the army staying loyal to Conde.

Troops were deployed to the streets in response to the incident, with the military blocking access from the mainland to Kaloum. Guinean President Conde was reportedly unharmed by the gunfire, but his exact whereabouts are still unclear.

Local residents say they have been asked by soldiers to stay in their homes, according to news agency AFP.

Meanwhile, some videos sighted on social media show that the citizens are happy with the capture of the president by the soldiers.

Soldiers announced on national television the end of Conde’s regime as they shares photos of him being detained in their custody.