Akufo-Addo is Number 1 on the Ballot Paper, John Boadu Believes NPP's Victory will be Easy 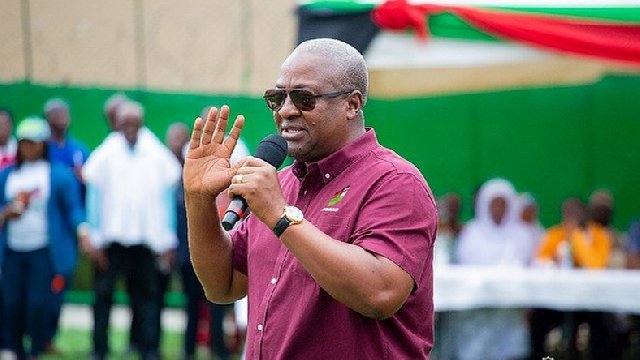 The flagbearer of the largest opposition party National Democratic Congress (NDC) , John Dramani Mahama says he believes God is not that wicked allow president Akufo-Addo  to continue another four years as the president of Ghana.

The former president, John Mahama is expected to meet traditional and religious leaders as well as the people of the Bono East Region as part of his three day campaign tour.

Mr Mahama lifted his eyes and hands in the sky as he often does during his campaign tours. He said;

The former president made this boldly declaration as he was addressing a heated crowd on a campaign tour, the charged crowd upon hearing the words gave their largest shout as if they have already won the elections.

Mr. Mahama at the NDC party manifesto launch recently, outlined many plans and policies he would do for the people of Ghana, if voted into power again.

Of all the promises he gave, the one which has got most Ghanaians discussing about is the legalization of the commercial motorbike popularly known ‘Okada’ in the country.

The former president appears to have already won the Okada operators heart and vote ahead of the December polls.

Recently, a group of hundreds of Okada drivers stormed Class FM premises to thank Mr Mahama for adding them to his plans.

However, the Vice-president Dr. Mahamudu Bawumia, has said the New Patriotic Party(NPP) will never legalized the Okada business, a statement which has rather got the Okada driver heated up.