GMAUK21: Medikal ‘Faints’ Behind His Wife Fella Makafui While Grinding Her Backside On Stage (Watch)
Advertisement 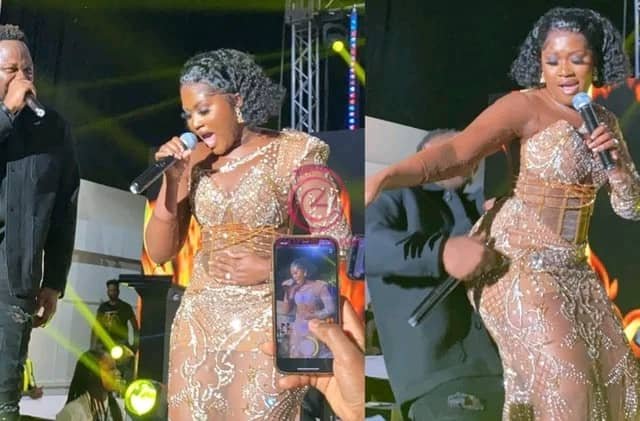 Celebrity couple and love birds, Medikal and Fella Makafui have yet again become the talk of town after they teamed up to perform at the just-ended Ghana Music Awards UK event.

The celebrity couple has on many occasions lighted stages they have mounted together to perform and they did just that 2 days back at the event in UK.

Fella Makafui was brought onto the stage to compliment her husband when he was performing at the event and in a matter of seconds, the place got lit as though the patrons were waiting for such a moment.

Read Also:  'I Will Shoot You, 3 Bullets In Your Head, 4 In Your Heart And Kill Myself' - Funny Face Threatens To Kill His Baby Mama In New Video

But at a point, Fella took over to sing her hubby’s song verbatim. The couple gave their all, accompanied it with a lot of crazy dance moves as Medikal was seen grinding the backside of his wife.

The dramatic moment Medikal pulled an act, falling on the stage while energetically gyrating behind Fella Makafui, has appeared in a video.

The viral video has since attracted a lot of reactions from netizens and some celebrities.

Meanwhile, Ghanaian-based actress Princess Shyngle has revealed that she will delete all her social media pages if her next partner is uncomfortable with them.

The movie star made the decision known via her Instagram page on Saturday, October 9, 2021.

“If I meet Mr right and he is uncomfortable with me being on social media, I’m ready to delete all my social media accounts to make him happy,” she wrote.

. Ladies would you delete your social media account for a man?.”

The movie star recently announced that she was getting divorced from her husband, Gibou Bala Gaye, three months after their marriage.

I Was Nearly Stabbed In Kumasi – Naakay Reveals [Video]