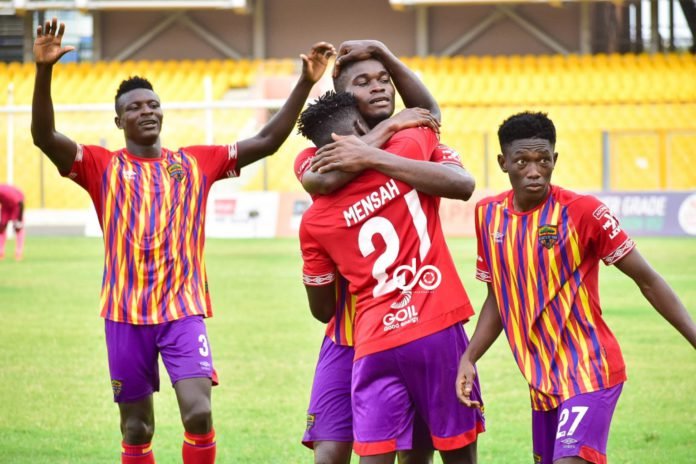 Hearts of Oak put their troubled week behind them by beating Ebusua Dwarfs in the Ghana Premier League, thanks to a late goal by Isaac Mensah.

Head coach Kosta Papic resigned as well as assistant coach Asare Bediako and the goalkeeper’s trainer Ben Owu which saw Hearts trend for the wrong reasons ahead of the match.

However, the players reacted well to end four games winless run. Victor Aidoo scored a brace as he converted two penalties in the first 19 minutes but Dwarfs drew level courtesy Moro Sumaila and Dennis Korsah-Akoumah, who scored a penalty of his own.

The game looked destined to end in a stalemate but Isaac Mensah found the net in the 93rd minute with a fine strike.

Elsewhere, Ahmed Toure scored two goals on his debut for Medeama, who beat Elmina Sharks 2-1 at the Nduom Sports Stadium.

There were reports of Sharks’ fans attacking referee Eric Owusu Prempeh after the game.

Dreams suffered their first defeat in eight games at Berekum Chelsea, which recorded a 1-0 victory.

Karela United moved four points clear at the top with a 2-0 home win against Liberty Professionals.

Great Olympics lost 1-0 at Techiman against Eleven Wonders. The win is Wonders’ first since matchday 10 and are out of the relegation zone.

On Saturday, Inter Allies recorded a 1-0 win against WAFA to end their seven-game winless run while Ashgold hammered Aduana Stars 4-0 on Friday.

Kotoko were not in action over the weekend with their game against King Faisal postponed due to Caf Confederation Cup duty.

Results of matchday 15 games below:

Checkout the GHPL table below.. 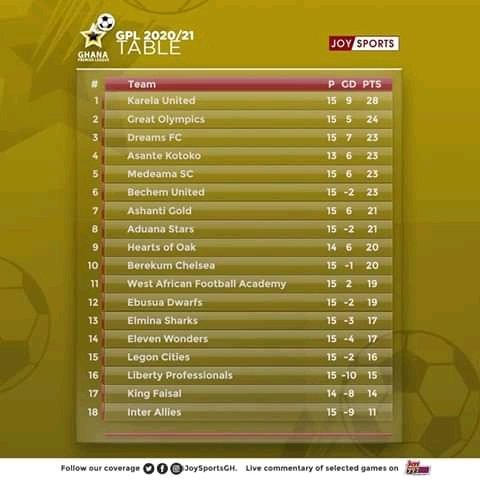