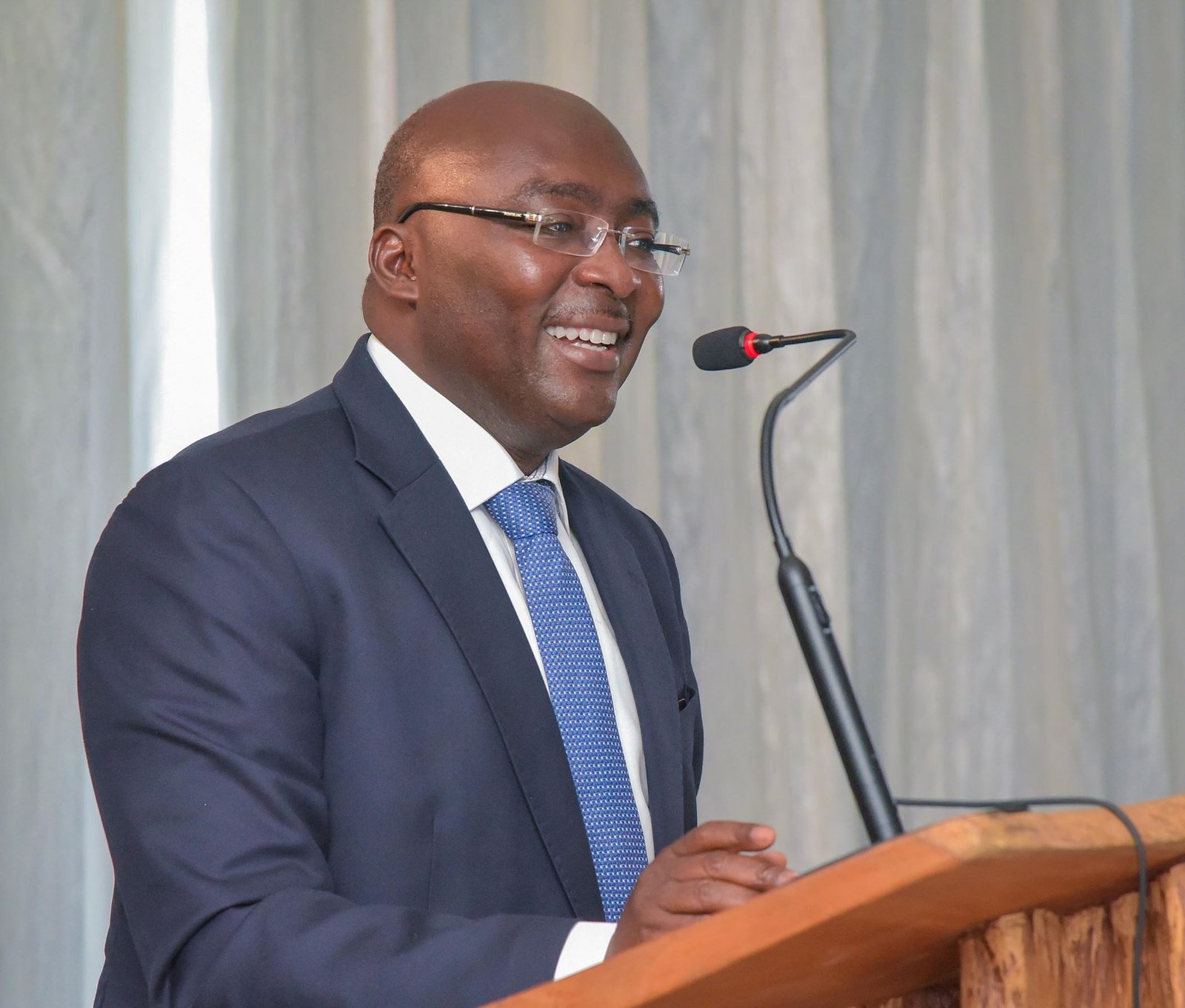 The Vice President of Ghana, Dr. Alhaji Mahamudu Bawumia today in his new year message as  he ushered Ghanaians into  2019 used the opportunity to highlight the successes achieved by his government with respect to promises made by NPP prior to the 2016 elections.

He acknowledged the fact that it has been hard but fruitful work for the country since taking up the mandate. Dr. Bawumia further went on to thank  God to have President Nana Addo Dankwa Akufo-Addo as President of Ghana.

In his statement he said “As we come to the end of 2018, we have to thank God for all his mercies. We are thankful for what God has made possible for President Nana Addo Dankwa Akufo-Addo and the NPP to accomplish during our first two years in office”.

Some of the policies listed by the vice president,Dr. Alhaji Mahamudu Bawumia, which he attributes to their successful two years  based on campaign promise and delivery basis includes but not limited to:

He ended his statement by saying “It has been an honour for me Dr. Mahamudu Bawumia to serve as his Vice-President.We look forward to a blossoming 2019.Happy New Year in advance”.
Are you feeling the impact of the successes of the interventions underscored above by the Veep? Leave your thoughts in the comment section below. 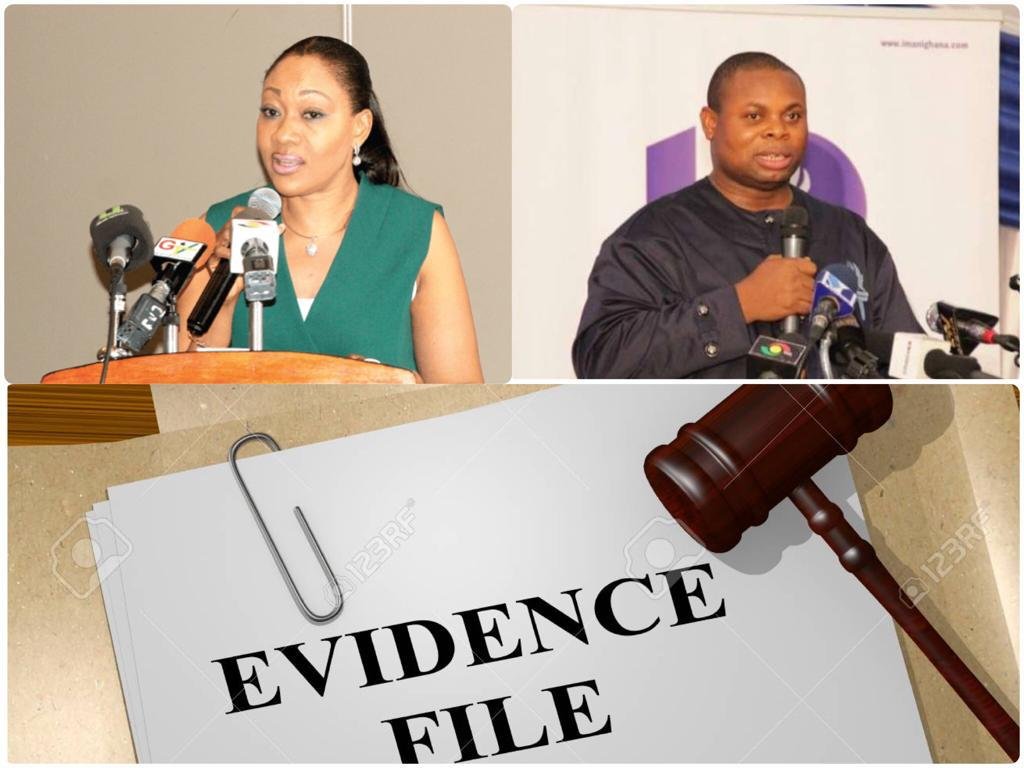 Contrary to the belief that Jean Mensa will be a free woman to do her job, she was haunted by the courts over the week to present the legal basis of rejecting Old Ghana Voter’s Identification Card as authentication to compile the New voter’s register within this month.

She returned from the court to meet a document which has initiated her likely impeachment and removal from office as the boss of the Electoral Commission of Ghana.

The document which has found itself in the media circles has stated some strong questions which failed to answer, which will spark a similar instance that sent Mrs. Charlotte Osei out as the Electoral Commission Boss. Charlotte Osei was thrown out on many bases. Notably among them was a breach of procurement protocols which the current Electoral Commission Boss has also been accused of.

Strongly linked in the letter is Franklin Cudjoe’s IMANI Ghana which has provided strong evidence to the group to help put Mrs. Jean Mensa out of office.

Below is a copy of the Document containing the series of questions begging for answers or resigning from the office. 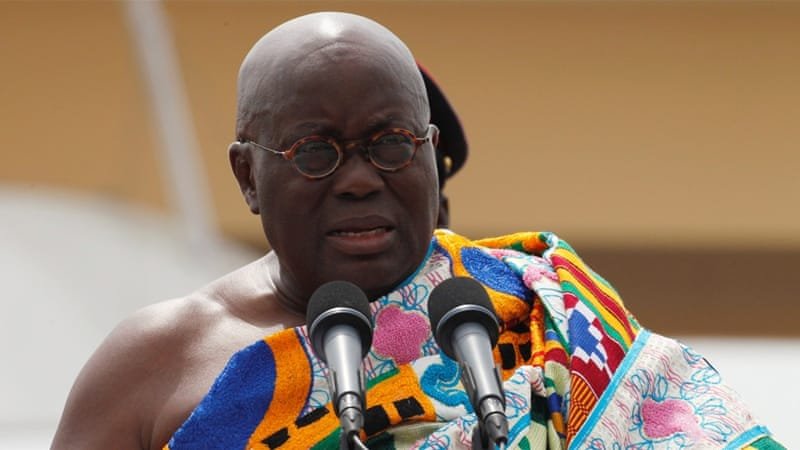 Ghanaian president, Nana Addo Dankwa Akufo-Addo has finally reacted to the current unfortunate developments in the United States of America over the past few days.

Recall that in a viral video, George Floyd on Monday the 25th of May, 2020 died after he was pinned down by a police officer, his cheek pressed into the asphalt of the street just behind the right-back tire of the Minneapolis Police SUV. Before giving up the ghost, he was heard screaming, “Please, please. I can’t breathe. “I can’t breathe, officer.” as one of the officers, identified as Derek Chauvin continues to kneel on Floyd’s neck, till he stopped breathing.

Following the unfortunate incident, there has been an outpour of solidarity messages across the world to the family of George Floyd while demanding justice for the deceased.

The latest to join is the president of Ghana, Nana Akufo Addo. He put out a post on his Facebook space expressing his deep condolences to the family and loved ones of the late George Floyd on behalf of Ghanaians. 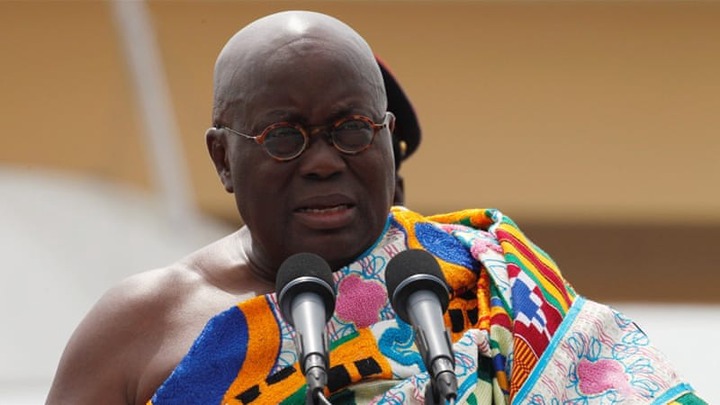 ”It cannot be right that, in the 21st century, the United States, this great bastion of democracy, continues to grapple with the problem of systemic racism”, he said. 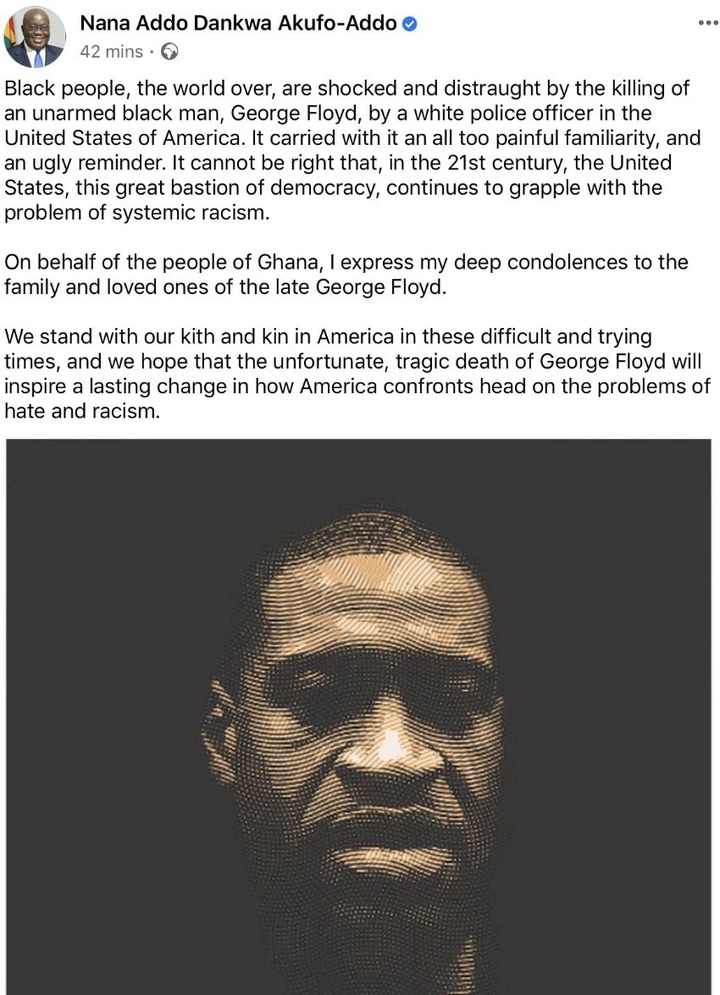 READ ALSO; All Final Year Students To Go Back To School On June 15

But unfortunately, his message was met with unexpected reactions from Ghanaians. As it was originally expected that they would side with the president to send kind words to their fellow Africans in America, many are of the view that he is not in the position to do so since same incidents occur in his own backyard (Ghana) and he has done nothing to solve them.

Some angry Ghanaians took the opportunity to remind president Akufo Addo about his failed promises of finding the missing and now dead 3 Takoradi girls, the killers of undercover journalist, Ahmed Suale and even his own member parliament, J.B Danquah Adu amongst others.

Many also believe that the president okays tribalistic bigotry in his government which is perpetrated by his own government appointees and some party leaders against other tribes.

It was argued that tribalism is similar to racism. Some people even believe that it is even worse than racism since this one is towards your own native – the only difference is language.

See some of the reactions below; 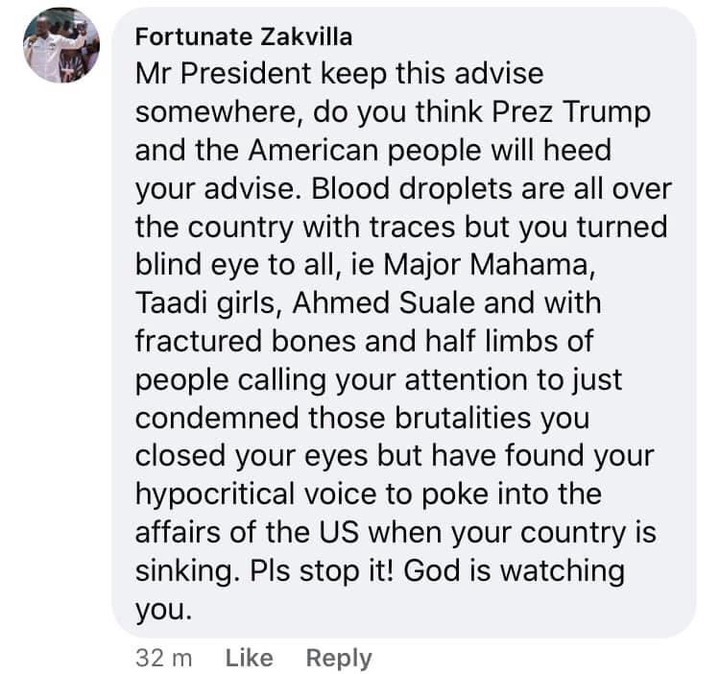 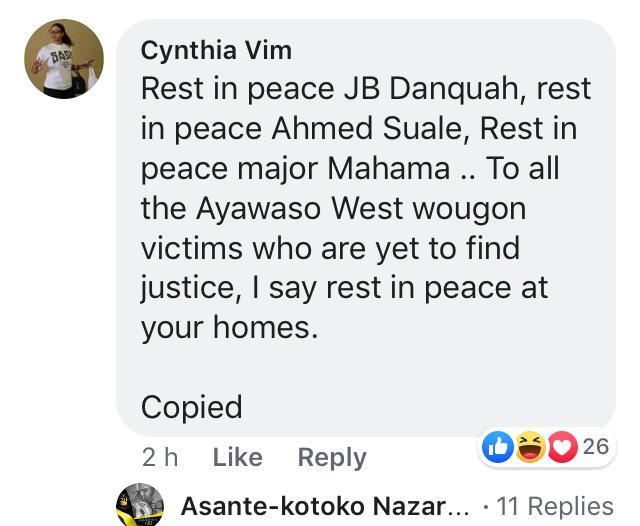 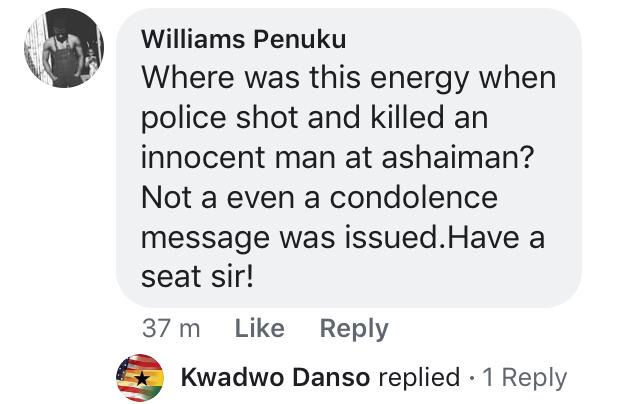 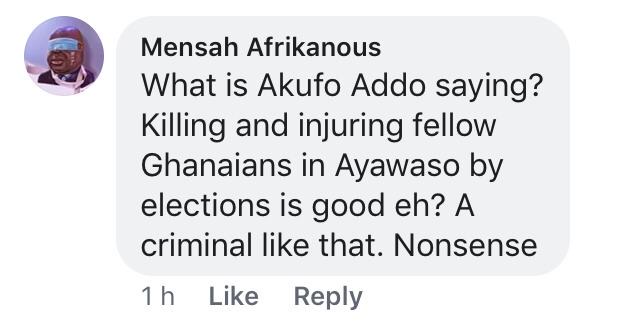 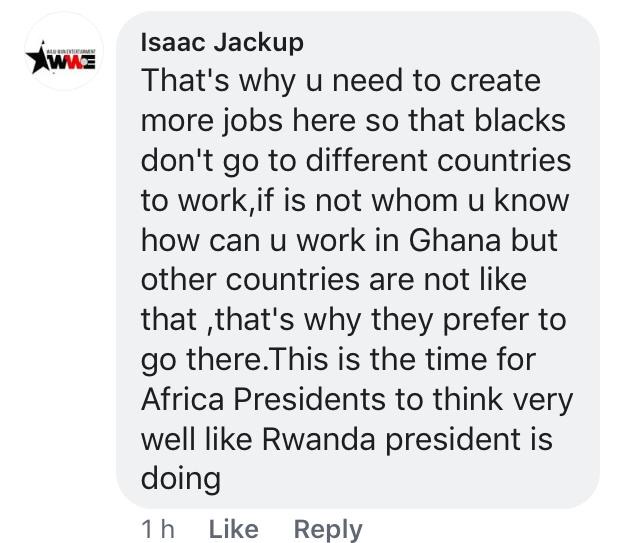 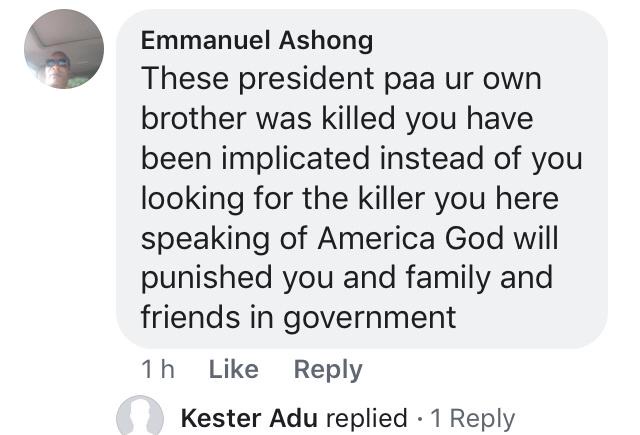 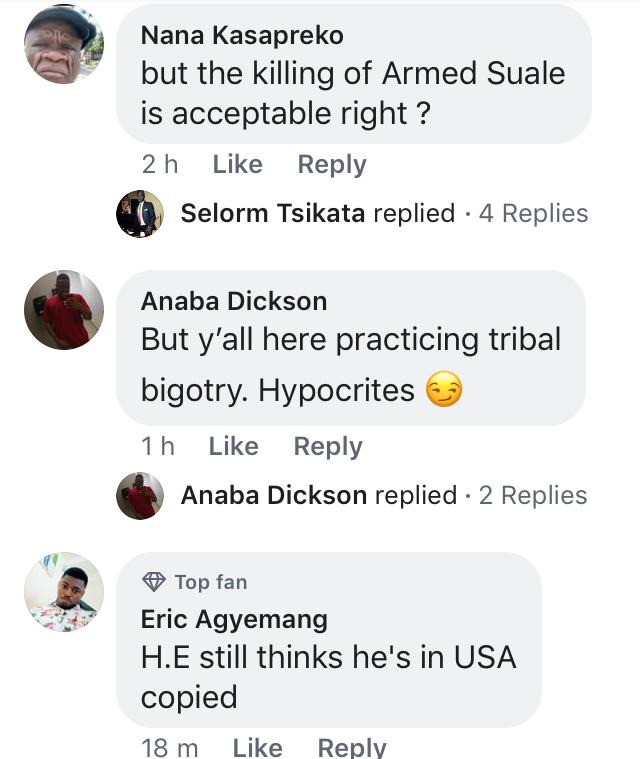 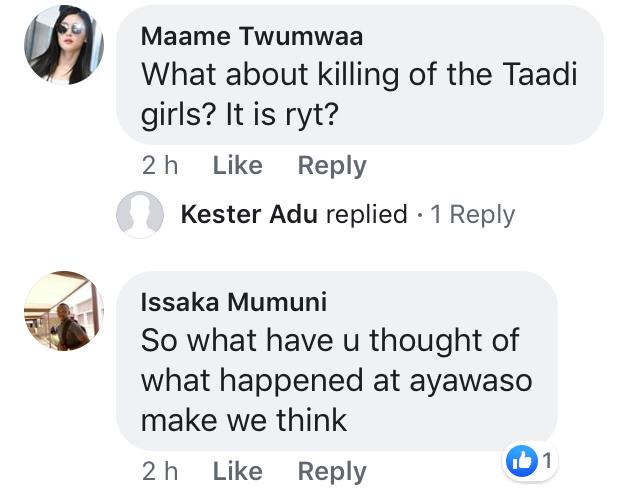 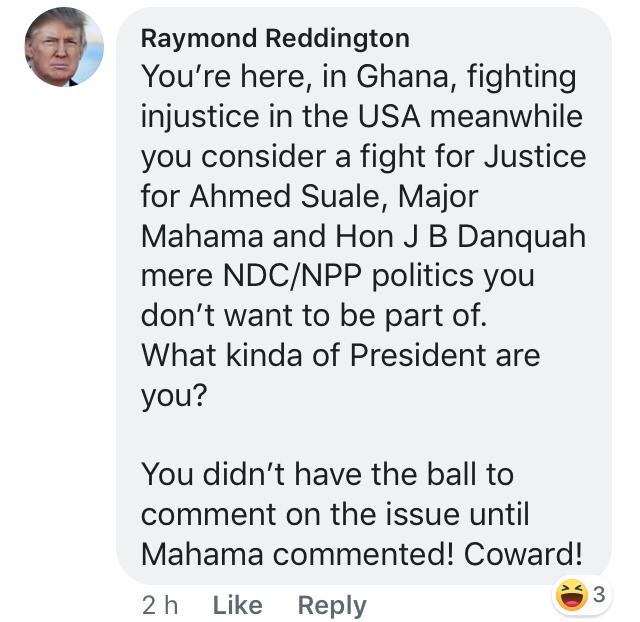 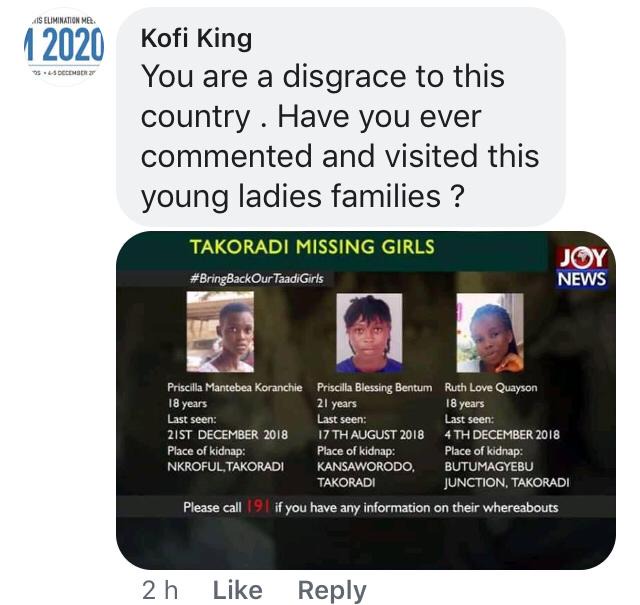 What do you make of the reactions towards the president’s message? kindly leave your opinion below.