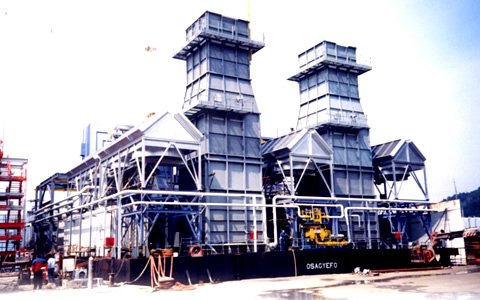 Four police officers have been interdicted for stealing cables, fridges and other valuables from the Osagyefo Power Barge at Efassu near Half-Assini in the Western Region.

The Police Commander for the area DSP Zengey MacCarthy who confirmed the interdiction said the policemen had been assigned to protect the barge.

Two officers, L/Cp Peter Zator and L/Cp Ibrahim Mohammed who were arrested in February 2019 have named two other officers who they claim were involved in the theft.

“Police got information, laid ambush and lo and behold we were able to arrest them. We conducted a search in the car and we found some items there including six-burner gas cooker, fridges and a number of electric cables. The Policemen as we speak are on interdiction, the case has been forwarded to the Regional CID and definitely the law will take its course,” DSP Zengey MacCarthy said.

The Osagyefo Barge is a 125 MW barge-mounted gas turbine electric power generating station located at Effasu in the Western Region of Ghana.

The 77m long barge is equipped with a pair of single-cycle heavy-duty gas turbine units built by Ansaldo that have a combined generating capacity of 125 MW. It is designed to burn either natural gas or diesel fuel.

The 125 MW power barge was ordered by the Ghanaian government in 1995 with financial assistance from the Overseas Economic Cooperation Fund of Japan. It was intended to generate electricity from natural gas obtained from offshore production fields. The project development called for 450 MW of combined cycle power barges to belated in a man-made lagoon.

The barge was built in Italy at Navalmare Yard, completed in 1999, and delivered to Ghana in October 2002. It was then moored at the Sekondi Naval Base in Sekondi until 2005, when it was moved to Effasu after the completion of dredging necessary to allow it to enter the harbour there.

Share with Friends:
Related Topics:Four Policemen arrested for stealing from Osagyefo Barge
Up Next