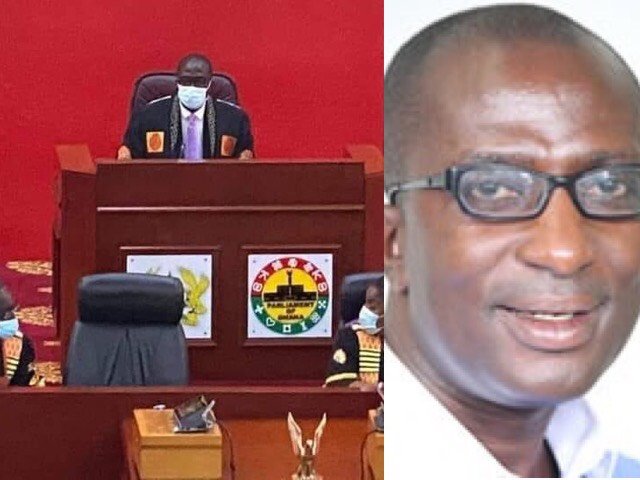 After barely two months after the former Speaker of parliament, Prof. Mike Oquaye sacked Formena MP, Honourable Andrew Amoako Asiamah from parliament on the advice of the New Patriotic Party, he serves as the Speaker in Parliament today as the speaker of the house.

In November 2020, the New Patriotic Party (NPP) Member of Parliament (MP) for Fomena, Andrew Amoako Asiamah, was removed from Parliament after his seat was declared vacant by the Speaker, Prof. Aaron Mike Oquaye.

The then Speaker, Mike Oquaye said Mr. Asiamah, having broken ranks with the party that sponsored him to Parliament and subsequently forfeited his membership by running as an independent candidate for the constituency, could no longer hold himself as the MP for the area.

Giving his ruling on a petition sent to his office by the NPP for the seat to be declared vacant, Prof. Oquaye invoked Article 97(1) of the Constitution, which provides that “a Member of Parliament shall forfeit his seat in Parliament if he leaves his party which he was a member at the time of his election to Parliament to join another party or seeks to remain in Parliament as an independent member,” to support the decision arrived at.

According to him, the NPP Constitution, of which the MP subscribes to, provides in Article 39(1) that “a member who stands as independent candidate against constitutionally elected member of the party or who joins or declares his or her support for another political party or for an independent candidate when the party has sponsored a candidate in the general or by-election, automatically forfeits his or her membership of the party.”

Read Also:  You Can’t Stop Us From Criticizing Unfair Rulings When We Know Some Of You Like Goat Soup Like Us – Franklin Cudjoe Dares Judiciary

The Speaker indicated that he had received a written response from the beleaguered MP, who had at the moment filed his candidature with the Electoral Commission (EC) to contest this year’s election as an independent candidate.

He argued that this move clearly showed that Mr. Asiamah “is seeking or seeks to leave his party,” and that “this automatically triggers forfeiture of his party membership.”

“He cannot have the desires to live by taking a step toward filing as an independent candidate and yet be a member of the party. The step taken to contest against his party automatically triggers forfeiture of membership,” he emphasized.

Honourable Andrew Amoako Asiamah who is the first deputy speaker in the 8th parliament is mandated constitutionally to take control of business of the house should the Speaker, Alban Bagbin becomes absent.