First Video Of Shatta Wale At Ankaful Pops Up; Inmates Hail Him
Advertisement 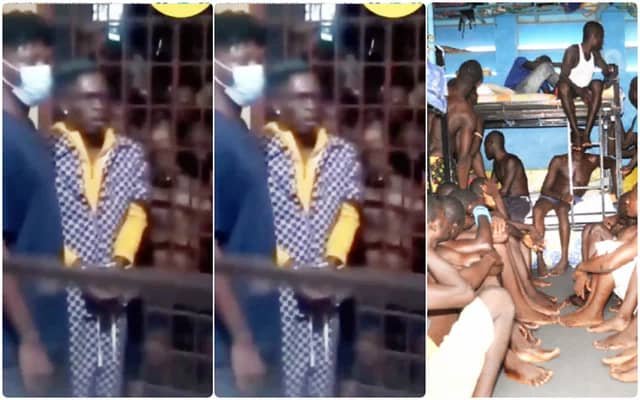 Shatta Wale was remanded on Thursday, October 21, 2021, after appearing before a circuit court in Accra.

Shatta Wale was taken to the Ankaful Prisons which is near Cape Coast to serve his remand term.

A video from the Ankaful prison has popped up showing the massive reception Shatta Wale received upon his arrival.

In the video sighted on Shatta Wale is seen dressed in black with a number of people including prison officers surrounding him.

The Melissa hitmaker took a stroll through the prison while a number of inmates lined up behind wired fences to hail him.

Many of the inmates were heard shouting ‘paah paah paah’ in excitement of Wale’s appearance in the prison.

Meanwhile, the Leader of New Life Kingdom Chapel International, Stephen Akwasi, had been granted a Gh¢100,000 bail by an Accra Circuit Court.

He has pleaded not guilty to the charge of causing fear and panic. Mr. Akwasi had earlier been remanded for five days after his arrest in connection with Shatta Wale’s hoax shooting.

He is the pastor whose prophecy the dancehall artiste has cited as the reason for his recent fake shooting.

Popularly known as Jesus ‘Ahuofe’, the prophet was seen in a viral video explaining circumstances under which the self-styled Dancehall King would be shot.

Davido, Chioma Spotted Together For The First Time Since Their Breakup