Man Jailed For Having $ex With 15 Chickens and a Dog 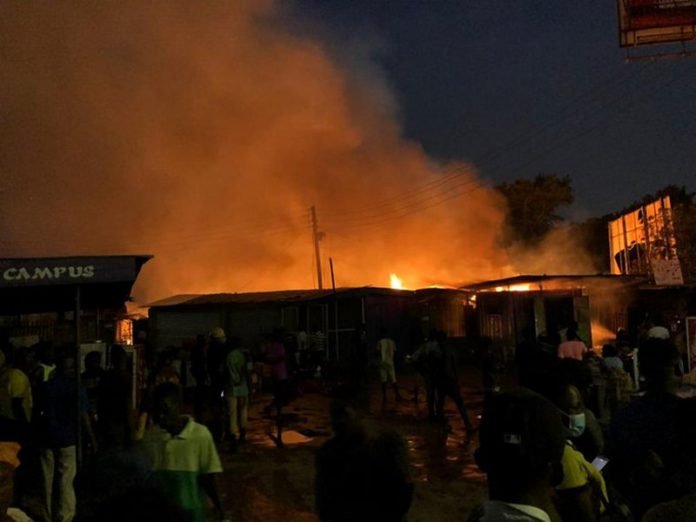 The Odawna market near the Kwame Nkrumah Circle has been gutted by fire at Wednesday dawn.

This incident according to eyewitnesses began around 1 am this dawn.

The fire, which eyewitnesses say has been raging on for hours, has left residents of the area and shop owners at the market, also known as the Pedestrian Shopping Mall in shock.

Although the cause of the fire remains unknown, videos show the fire spreading to other parts of the market.

Already, a crowd has gathered at the scene along with personnel from the police and fire service.

An eyewitness who spoke accused some market women of being responsible for the spread of the fire.

According to the witness, when the personnel from the fire service got to the scene, the entrance of the market had been blocked, making it impossible for the fire tender to move to where the fire was.

He explained that when the personnel got in touch with the market women to move their items, they refused to allow the men in the area to assist.

“Around 10:30 to 11 pm I was moving from the VIP Station heading to the market when I saw smoke. It was from a small fire. We started to put it out with water that we could find before rushing to call the fire service.”

The eyewitness further narrated that “the team rushed over with a vehicle and asked for the entrance to be cleared but the women insisted that they will move the items alone. When we finally had access to the market, we decided to remove all the cylinders from the stores close to the fire to prevent an explosion but again the women refused.”

“They accused us of trying to steal their stuff and locked up the market again,” he added.

“Within seconds, a cylinder exploded and caused the fire to spread. The fire service tried to put it out but it was difficult because of the cylinders and the types of items lying around. The fire service came back with about 10 cars but the fire is still burning.”

This is, however, not the first time, the Odawna market has caught fire.

In January last year, about 80 stalls were destroyed after fire swept through the market.

Although no deaths or injuries were recorded, eyewitnesses say large quantities of goods of assorted nature belonging to traders were lost along with huge sums of money.