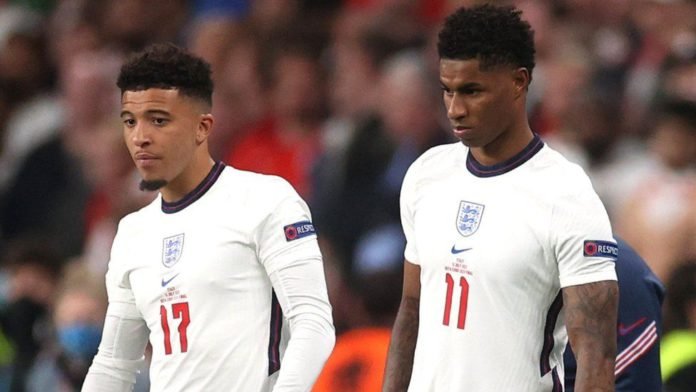 Marcus Rashford, Bukayo Saka and Jadon Sancho were targeted after they missed penalties in the Euro 2020 final.

“If we identify that you are behind this crime, we will track you down and you will face the serious consequences of your shameful actions,” he said.

Police said “a torrent of racist comments aimed at some of the team’s black players” appeared on social media platforms on Sunday, after England lost on penalties to Italy in the final at Wembley.

The UK Football Policing Unit said its team was working through “a significant number of reports of racist abuse”.

The latest arrest was made by Cheshire Police, who have arrested a 42-year-old man from Runcorn on suspicion of displaying threatening, abusive or insulting written material that is likely to stir up racial hatred.

The force said he was arrested as part of an investigation into a racist social media message, which was posted after the Euro 2020 final.

The man has been released under investigation pending further inquiries.

“Our England team have been true role models during the tournament, conducting themselves with professionalism and dignity. I’m disgusted there are individuals out there who think it’s acceptable to direct such abhorrent abuse at them, or at anybody else.”

He said the investigation would continue to try to find those responsible and officers were working closely with social media platforms, including Facebook, Instagram and Twitter.

And Prime Minister Boris Johnson has promised to ban people guilty of sending racist abuse to footballers from attending matches.

He said he would ensure the “football banning order regime is changed” to crack down on racism.

The UK Football Policing Unit said, as of 13 July, 897 football-related incidents and 264 arrests had been recorded across the country in the 24-hour period surrounding the final.