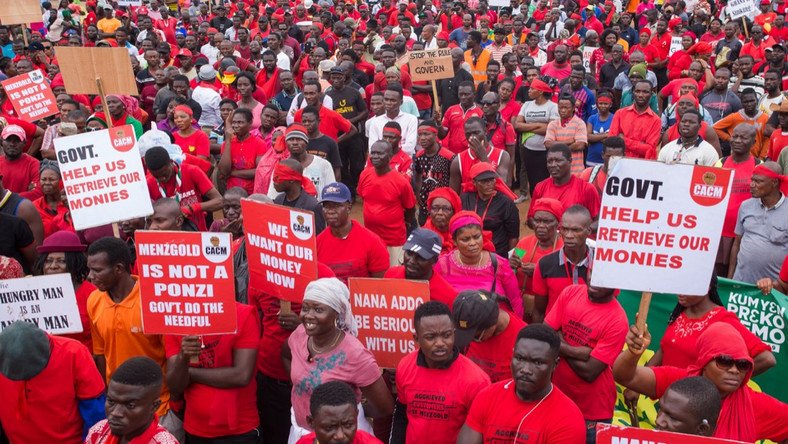 An elderly man is on the verge of losing his eye after the police officers and Arise Ghana protesters clashed during a peaceful demonstration which later turned bloody.

“This is what the Ghana Police Service did to a demonstrator this afternoon,” Ofosu Kwakye captioned the photo.

Meanwhile, the Ghana Police Service is yet to release a press statement to react to this allegation, however, the police earlier accused the protesters of injuring 12 officers who were deployed to protect them.

Videos have surfaced on social media showing moments the demonstrators attacking the police who formed a human barricade in order to prevent them from going beyond the agreed terms.

Attack on Police in the Ongoing Arise Ghana Demonstration. What a shame, we were there to protect you and ensure your safety, but you throw stones at us, injure and hurt us. This behaviour is unacceptable and must be condemned”, the police wrote on its social media pages on Tuesday, June 28.

The press release attached to the video said 12 officers have been injured by the protesters after they attacked them during the demonstration.

“The demonstration by the Arise Ghana group commenced with demonstrators gathering at the Obra spot at about 8 am. 2. Contrary to the court orders, the organisers insisted on using routes leading to the Jubilee House.

“All attempts to persuade them to comply with the court-approved routes did not yield the expected results. Unfortunately and without any provocation, the demonstrators began pelting the police with stones.

“So far, 12 Police officers who sustained various degrees of injuries and were treated in the Police Mobile Hospitals have been transferred to the Police Hospital for further treatment. Some police vehicles have also been damaged.

“The demonstrators further regrouped and burnt tires on the road around Circle. The fire from the burning tires has since been put out by the police.

“The Police, therefore, had no option but to use tear gas and water cannons to subdue the rioting and restore order. The process is still ongoing.

“The road has partially been cleared and we urge all road users to continue to bear with us and use alternative routes where possible as we take steps to fully disperse the rioting demonstrators. 8. We wish to assure the public that all those involved in this violent demonstration will be brought to face justice,” the statement signed by Grace Ansah-Akrofi, Chief Superintendent of Police, said.

Prior to the demonstration, IGP Dampare charged his men to comport themselves and treat the protesters with uttermost dignity, indicating that they are humans just like them.

Share with Friends:
Related Topics:Arise GhanaGhana Police serviceProtesters
Up Next