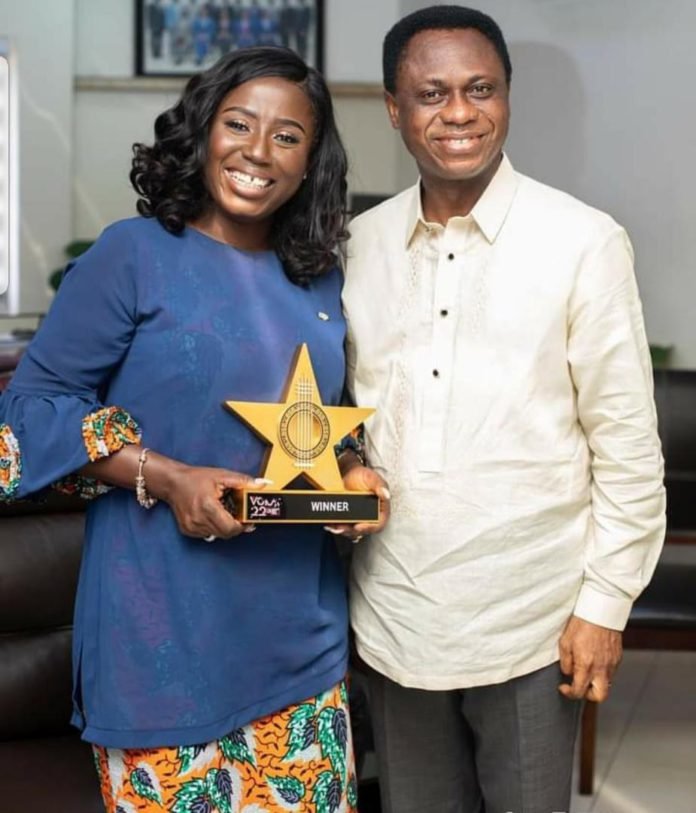 Newly-crowned Vodafone Ghana Music Awards (VGMA) Artiste of the Year, Diana Hamilton, has presented her award to the Church of Pentecost.

This was during a courtesy call she paid on the Chairman of the Church, Apostle Eric Nyamekye, in his office at the church’s general headquarters in Accra.

Present at the meeting were some executives including the General Secretary, Apostle Alexander Nana Yaw Kumi-Larbi.

Read Also:  Gyakie Describes the Bittersweet Feeling of Attraction on New Single, “Something”

Diana Hamilton thought it wise to pay homage to the church which trained her to be the talented gospel musician she is today.

She was trained to be a church singer, to be a backing vocalist and currently a mainstream singer.

Also, her father, Eric Felix Antwi, was an Apostle of the church, until his demise in 2013.

Read Also:  I Was Poisoned, Sent To A ‘Juju’ Man To Kill Me – Rapper Guru Says

Diana Hamilton becomes the first female gospel musician to receive the ultimate VGMA crown, but the second female to ever grace that position, only second to the late Ebony Reigns.

She won the award amid tough competition from KiDi, Adina, Sarkodie, Medikal and Kuami Eugene.