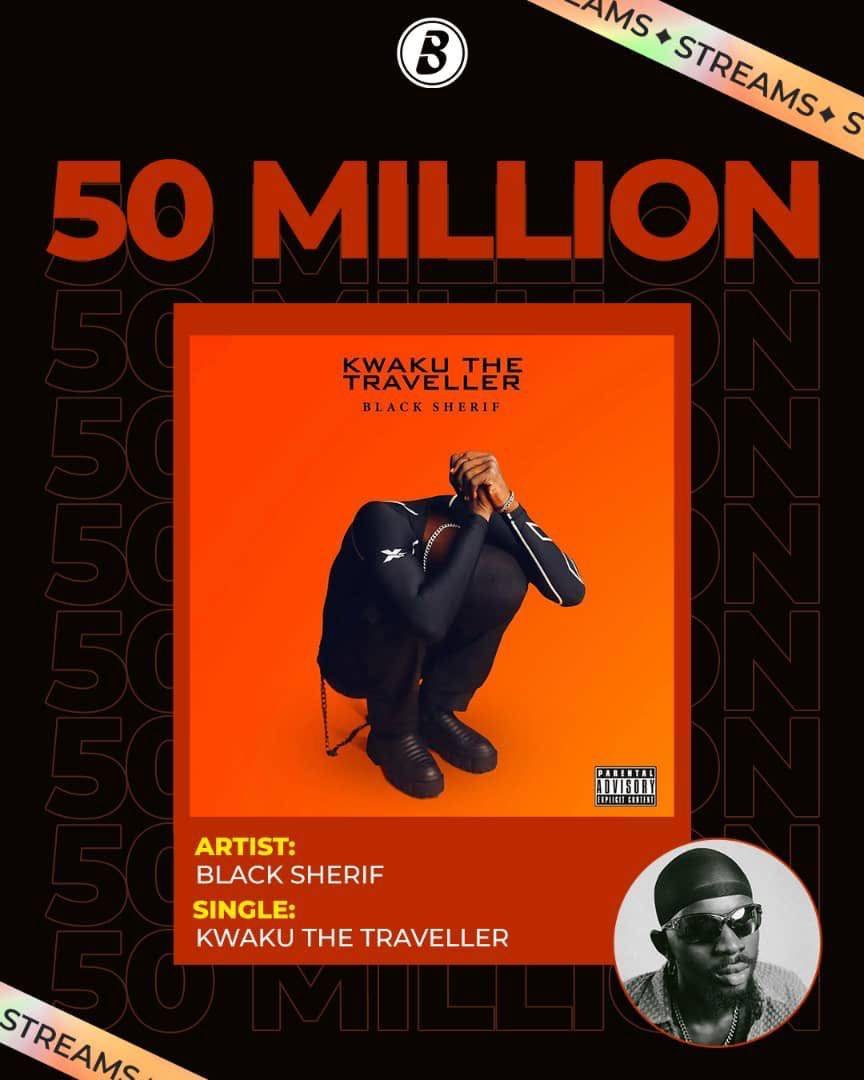 Ghanaian rising star, Black Sherif, has set a new record for a Ghanaian artist on Africa’s most expansive music streaming and download platform, Boomplay – the streaming platform that first discovered to Black Sherif. Sherif’s hit single, “Kwaku the Traveller”, has surpassed 50M streams on Boomplay and becomes the first song by a Ghanaian artist to attain such feat on the Boomplay platform, attesting to the wide African reach of the song.

Black Sherif has been on a phenomenal run since last year when his “First Sermon”, intended to be a freestyle prelude to an upcoming EP went viral and brought him to the limelight of Ghana’s mainstream music scene. Following the “First Sermon” was even a bigger record in “Second Sermon”, and its remix featuring leading Afrobeats and Afro-fusion artiste, Burna Boy, who has taken the collaboration song to many stages across the globe on tour. 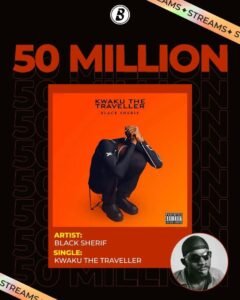 Then “Kwaku the Traveller” (KTT) by Black Sherif was released on Friday, 31st March, 2022, to global herald. It became the first Ghanaian song to record a 1M streams on the first day of release on Boomplay. The weekend after its release, the song consistently recorded additional 1M streams per day for close to week to top Boomplay Top 100 Ghana and Nigeria charts in the process and later Boomplay Top 100 Africa chart. By 20th April, 2022, “Kwaku the Traveller” (KTT) had raked in 14.6M streams and on 2nd August, 2022, it clocked 50M streams.

KTT by Black Sherif has also debuted and peaked on other notable music charts including no. 1 on Turntable Top 50 in Nigeria, no. 5 on Billboard Afrobeats US Songs, no.2 on the UK Afrobeats Singles Chart and no. 12 Billboard Top Triller Global. It also made notable appearances in charts on other digital streaming platforms including Apple Music and Spotify.

Commenting on the 100M milestone, Blacko diclosed that “Reaching 100 million streams on Boomplay in such a short time and being the first Ghanaian artist to achieve this feat is a big deal to me. As a young kid from Konongo, who only had a dream and a voice, this brings me to the realisation that I can achieve any and everything so long as I believe and dare myself to take action.  Big love to the Boomplay team for putting me on from day one till now.”

Born Mohammed Ismail Shariff, the 20-year-old talented artist has always been inspired by highlife music which was played out loud near a football park near his home where public functions were held regularly. Blacko would, however, begin to take music seriously while about completing his High School education. Upon completion, he came to the capital, Accra, to pursue his music ambitions. He released “Money”, “Cry For Me”, and “Destiny” in 2020, which gained him online traction and following on Boomplay. The Boomplay Ghana team reached out to him to inform him of the buzz he was garnering on the platform and offered some pieces of advice on release strategies. Later, Blacko dropped “Money (remix)”, “Adea Kye”, and “Ankonam” and further extended his reach on Boomplay and earned him a sizeable following on other platforms as well.

When Black Sherif’s “First Sermon” and “Second Sermon” were released in 2021, they went viral and brought him to the limelight.  A remix of his “Second Sermon” featuring Burna Boy gave him wider reach across Africa and beyond. Consequently, during Boomplay’s Recap 2021, which highlights stats and insights of music consumption and engagement on the Boomplay platform, Blacko emerged as Ghana’s 2nd Most Streamed Artist of 2021 and his “First Sermon” and “Second Sermon” were the 1st and 2nd Most Streamed Songs of 2021.

His story written in bright lights and stars, Black Sherif, went on to win the four awards earlier in the year at the 2022 3Music Awards, held in March 2022. The four 3Music awards included the Boomplay Breakthrough Act of the Year category. At the same event, he debuted a spectacular performance of his current single, “Kwaku the Traveller”. The song has skyrocketed him to African stardom. His debut album is highly being anticipated across Africa and expected to be released very soon.

Blacko is truly a superstar in the making, and the journey still continues for “Kwaku the Traveller”! Congratulations again to the son of Konongo Zongo!