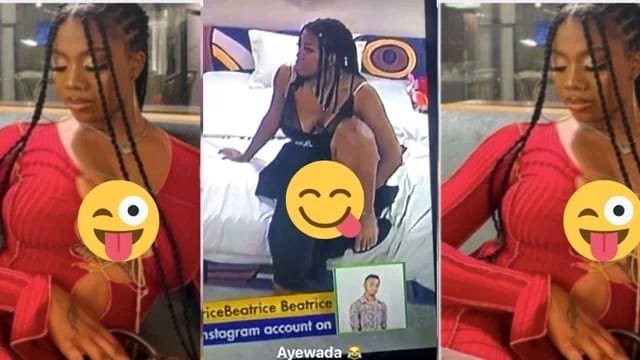 Angel one of the housemates has shocked viewers of the ongoing BBNaija after she unashamedly inserted her finger down there and did her own thing while they were filming her.

Before the show, the young lady shamefully put her ‘falling b00bs on display and got a lot of people reacting and asking what exactly is wrong with her.

In an apparent gesture to tell the world, she does not care about the cameras that surround all the housemates who pick their actions for viewers, Angel sat on her bed, raised one leg, and placed her fingers deep inside herself.

Her eyes rolled and glowed which clearly showed she was enjoying every bit of her steamy session.

Her actions have evoked mixed reactions online but ultimately it underlines the moral decadence associated with the popular reality show.

Some fans reacted to the event describing her angel as “unangelic.”

The popular show has its reputation for the immoral behaviours that usually take place in the house.