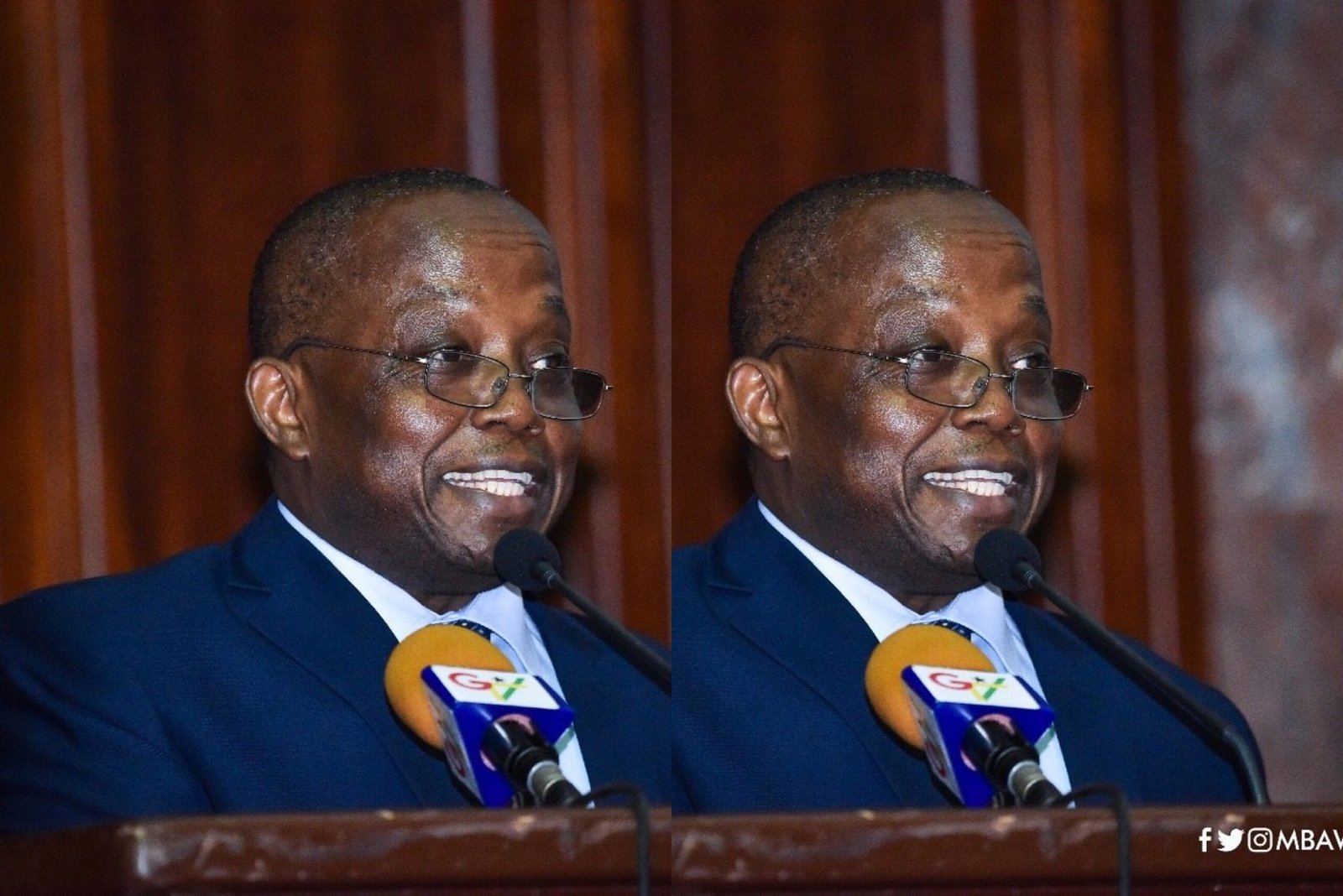 The Audit Service Board is challenging the nationality and retirement age of the Auditor-General, Daniel Yao Domelevo.

The board says Mr. Domelevo is a Togolese and was born in 1960 hence was due for retirement on 1st June 2020.

In a series of correspondence between the Chairman of the Audit Service Board, Prof. Edward Dua Agyeman and Mr. Domelevo, the Audit Service board said it had discovered such irregularities and anomalies and requested an explanation.

In providing details to its claim, the Audit Service Board said in a letter dated 26th February 2021 that, “Records at the Social Security and National Insurance Trust (SSNIT) completed and signed by you indicate your date of birth as 1st June 1960 when you joined the scheme on 1st October 1978. The records show that you stated your tribe as Togolese and a non-Ghanaian. That your home town is Agbatofe.”

“On 25th October 1992, you completed and signed a SSNIT Change of Beneficiary Nomination form, stating your nationality as a Ghanaian and your home town as Ada in the Greater Accra Region. The date of birth on your Ghanaian passport number A45800, issued on 28th February 1996 is 1st June 1961. That place of birth is stated as Kumasi, Ashanti Region,” the correspondence stated.

But Domelevo in a written response to the letter explained that his grandfather was a native of Ada in the Greater Accra Region but migrated to Togo and stayed at Agbatofe.

READ ALSO; Domelevo Finally Resumes Work On March 3 After Akufo-Addo Forced Him on Leave for 167 Days

He indicated that his father Augustine Domelevo migrated from Togo to the then Gold Coast.

“Either my father wrongly mentioned Agbatofe in Togo as his home town to me, or I misconstrued it at the time… My mother is also a Ghanaian,” he explained.

On his true date of birth, Mr. Domelevo said he noticed that the 1960 date of birth was a mistake “when I checked my information in the baptismal register of the Catholic Church in Adeemmra.” 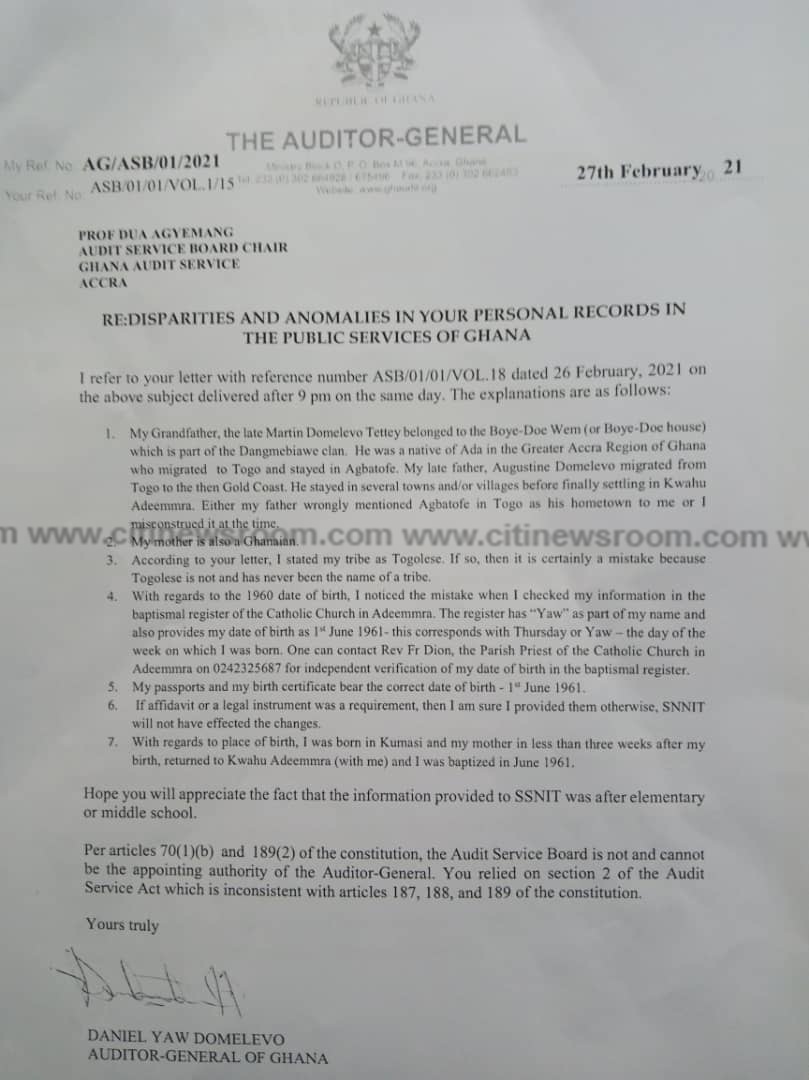 “The register has Yaw as part of my name and also provides my date of birth as 1st June 1961 – this corresponds with Thursday or Yaw- the day of the week on which I was born.”

But the Audit Service Board in a letter dated March 2, 2021, said Mr. Domelevo’s explanation of his nationality and narration of his grandfather’s migration is irrelevant.

The letter further described Mr. Domelevo’s answer to the issue of his date of birth as being inconsistent.

On Domelevo’s reference to his baptismal certificate to confirm his date of birth, the Board said that the document “is not a valid document to authenticate your date of birth.”

Again, the Board said Mr. Domelevo’s reference to a Parish Priest and provision of his contact for further verification of his date of birth is not admissible.

“Observation of your responses and explanations contained in your above reference letter make your date of birth and Ghanaian nationality even more doubtful and clearly establishes that you have made false statements contrary to law.” 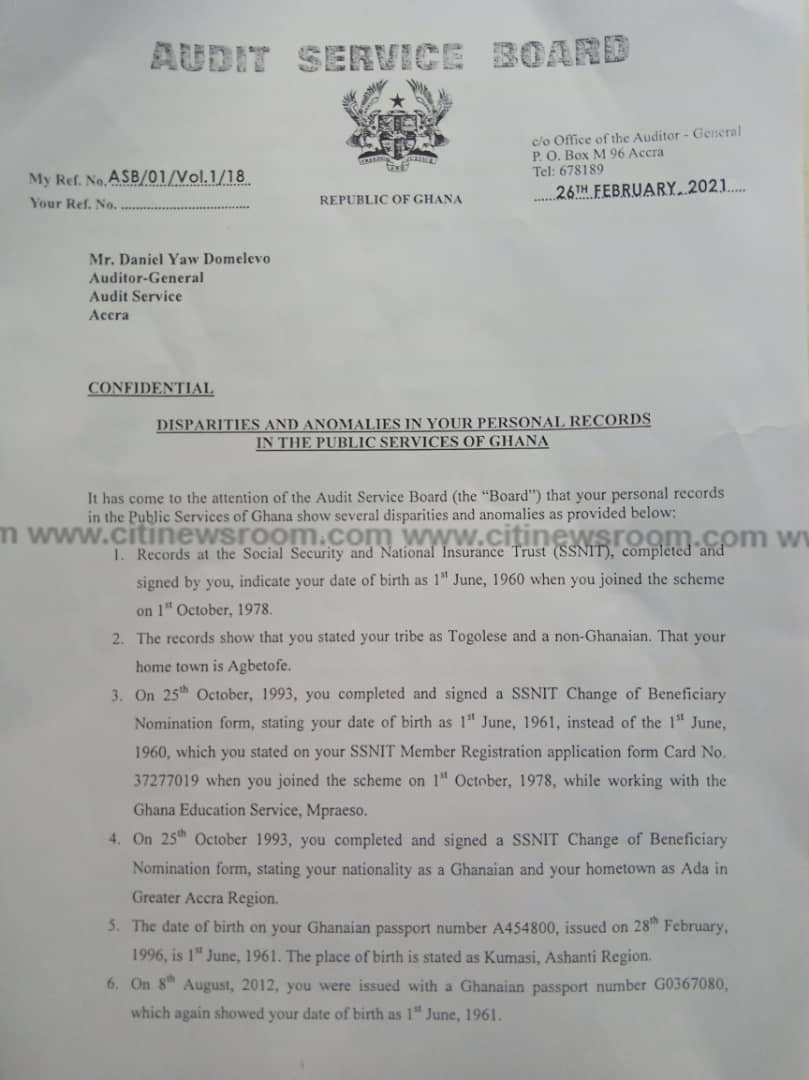 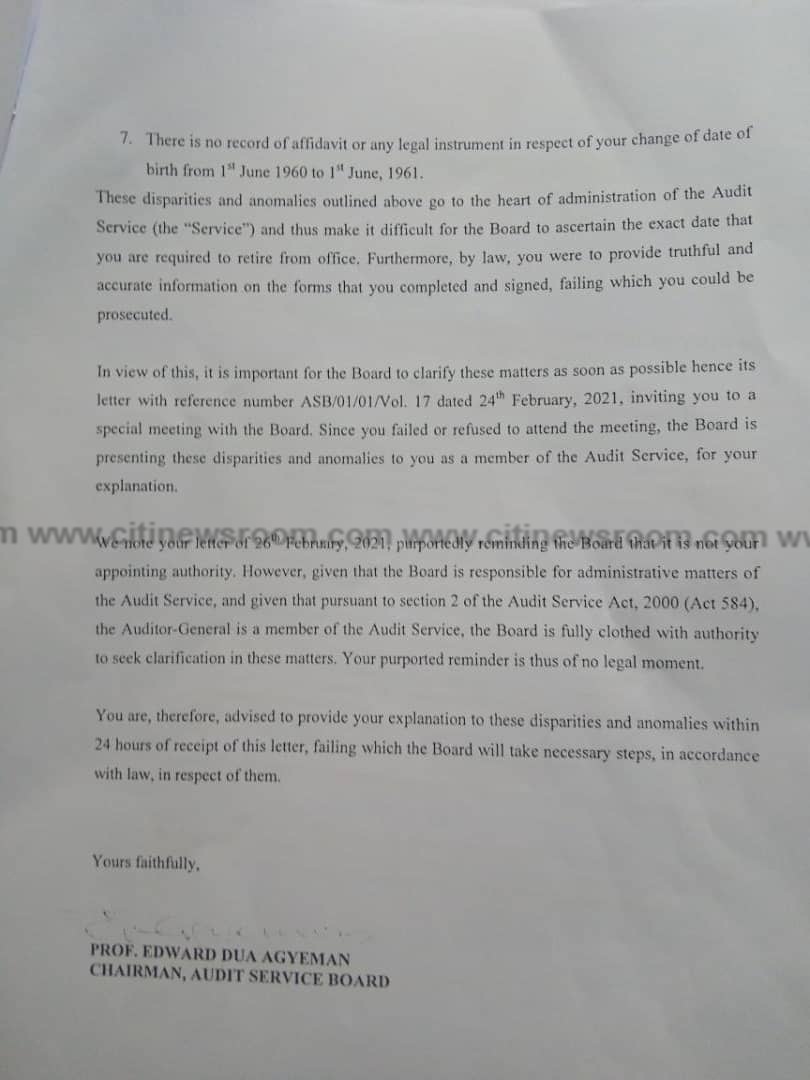 The Board consequently insisted that Mr. Domelevo was due for compulsory retirement on June 1, 2020, and was in fact not a Ghanaian but a Togolese.

“Records made available to the Board indicate that your date of retirement was 1st June 2020 and as far as the Audit Service is concerned you are deemed to have retired,” it noted.

The Board further added that it was informing President Nana Addo Dankwa Akufo-Addo about the development for him to take the necessary action.

Mr. Domelevo was asked to proceed on his accumulated leave of 123 days but had the duration extended by 44 more days to include his leave for the year 2020 other than just the initial leave period calculated from his 2017 to 2019 working years.

The Auditor-General was said to have made use of only nine out of his 132 annual leave since assuming office in December 2016.

Earlier this year, there were unconfirmed media reports that the Auditor General was to resume work on January 11, 2021, but Mr. Domelevo in a social media post clarified that his leave rather ends on March 2, 2021.

He disclosed that he will however go to the office on March 3.

Controversial as it was at the time, about 1,000 Ghanaians in Ghana and abroad, led by Korieh Duodu and Lolan Sagoe-Moses signed a petition presented to the Presidency demanding a reversal of the leave directive to Mr. Domelevo.

They noted that, the President’s directive, issued in a letter dated 30th June 2020, renders the Auditor-General, an independent constitutional officer mandated with auditing the accounts of all Ghanaian public institutions, incapable of performing his duties.

But the Presidency said the leave order could not be reversed.

Domelevo had said he will be at post on Wednesday, March 3, 2021, following the expiration of his 167 days forced annual leave which began on July 1, 2020.

Prior to the leave order, Mr. Domelevo was facing a lawsuit from the former Senior Minister, Yaw Osafo-Maafo, and four others, who were challenging a $1 million surcharge.

In May 2020 however, he was found guilty of contempt for failing to respond to the suit.

The Senior Minister and four other officials from the Ministry of Finance sued Mr. Domelevo to clear their names in relation to what was said to be breaches of the Public Procurement Act (PPA) that resulted in their payment of US$1 million to a private UK firm, Kroll and Associates.

They maintain that the Auditor-General erred in law and professional procedures.

The government also held that Mr. Domelevo did not go through proper constitutional practice before going public and announcing the findings.