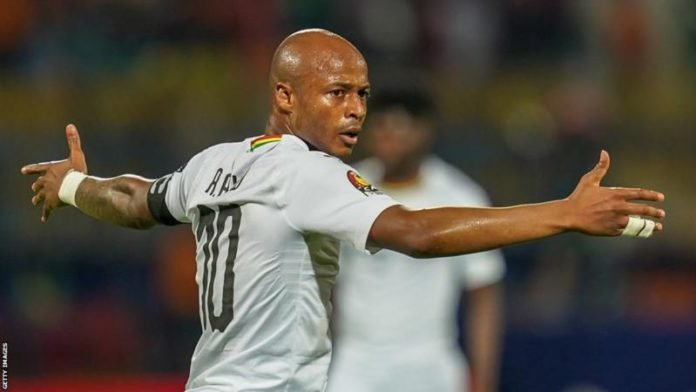 Andre Ayew has detailed why he was axed from Black Stars starting lineup against Zimbabwe in Harare on Tuesday.

The Black Stars started the game which ended 1-0 in favour of Ghana from the bench in the matchday 4 games of the 2022 Fifa World Cup qualifiers.

The decision by Milovan Rajevac came as a surprise to many Ghanaians following the announcement of the squad.

Ayew came on to replace Kudus Mohammed in the 86th minute.

“I think the boss did the right thing [in benching me from the start]. We spoke about the injury I was nursing and I’m just so happy that we have the points,” the Al Sadd SC star said at post-match.

“It was not an easy time and game for us but we are in a period where I have to be there for the team and every point is important but there are times you have to up a collective decision.

“I hope that we will continue like this against Ethiopia and the other game and I believe victory will be ours. Ghana will surely qualify for the World Cup,” he added.

The Black Stars grabbed the victory via Thomas Partey’s free-kick in the 31st minute.

Ghana went top of the Group G table with nine points but a win for South Africa dropped the Black Stars back to second on the standings.

Meanwhile, the Confederation of African Football (CAF) has decided to exceptionally allow the presence of 2,000 spectators for the TotalEnergies CAF CL 2021/22 – Hearts of Oak (GHA) Vs W.A.C (MAR) – Match 45.

In a letter sent to the GFA, the continent’s governing body reiterated that the CAF and FIFA covid-19 match protocols clearly state that all matches must be played behind closed doors.

It, however, added that it has taken the decision to exceptionally grant the GFA and Hearts of Oak’s request after analyzing and assessing the safety & security situation at the Accra Sports Stadium.

Read Also:  My Absence From Hearts of Oak Was Due To Runny Stomach - Gladson Awako

“We kindly ask your cooperation to fully comply with the above decision, while noting that in case of non-respect, your federation will be subject to disciplinary sanctions by CAF”, Raul Chipenda Development Director stated in the letter.

Hearts of Oak Players Promised GHC1000 Each If They Beat Wydad

2,000 Supporters To Watch Hearts of Oak Vs Wydad Clash