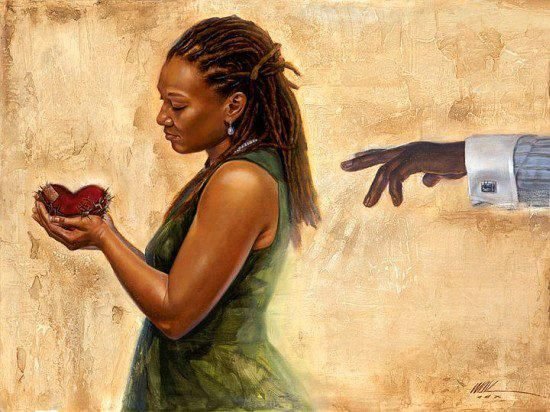 I think we need to talk. It’s about time. Yesterday I was on the phone with a woman. She was hurt. What was the reason for her hurt? Your guess is as good as mine. A guy she loved is no more interested in her. She’s been crying. She needed someone to talk. I was that someone. There was nothing I could do to calm her hurting heart. The cut went too deep and she has been bleeding. Her final words were, “I don’t think I will ever trust that deep again.”

You know what that means?

It means another guy, will have to clean up the mess you created. Not only that. It means another guy is going to be punished not for a mistake he’d committed but a mistake you have committed. We all need a woman who will trust us just enough to have a happy relationship with us. You’ve taken that trust away, how then do we get them to trust us?

It was beautiful when you met her. She didn’t want to be with you. She wasn’t convinced she was making the right choice by saying yes to your proposal. But you did everything right so she would be convinced that you are the one. You said all the right things. Took her to all the right places. You actually made her feel she would be making a huge mistake to say no to you. She’s a woman. Sometimes she needs to belong so she said yes. Finally, she’s your girl. All she wanted was for you to continue to be the sweet gentleman she fell for. Is that too much to ask?

Then, one day things started changing. Communication became one-way; if she doesn’t text, you don’t text. If she doesn’t call, you don’t call. Even when you’ve seen her missed call, you wouldn’t call her back until she calls again. She has to beg you to be available for her. And when you’ve finally agreed to be with her, you fidget with your phone until you leave. She’s not a fool. She saw the change and asked you about it but you said nothing was wrong. Not that she believed your answer. She only trusted you’ll soon come back to normal, from whatever is worrying you.

She is not asking for too much. She asking you to be that guy she fell for. That guy who took her out for a drink and brought her back home. That guy who called her early in the morning and asked how her night was. That guy who sent her the last text of the night to wish her sweet dreams. Just be that guy. That is all she’s asking for. But you won’t because you think you are better off without her.

Maybe you thought is just a game but this is what you are doing to her;

a) You are putting a pain in a heart that did nothing wrong but to love you.

c) You are making her lose trust in her self

But eventually, she will be alright. She’ll be done crying over you. The hurt would be no more and she’ll move on. She’ll pick up her crown again and be the queen she had always been. But what then becomes of you? Nothing but a coward who didn’t know how to handle the love of a woman.

Thanks a lot for reading!  If you enjoyed this, kindly hit the share button and help others to also see it. You can also like our Facebook page so you know when we make new posts.

Please send us your articles for publication via enewsghana1@gmail.com