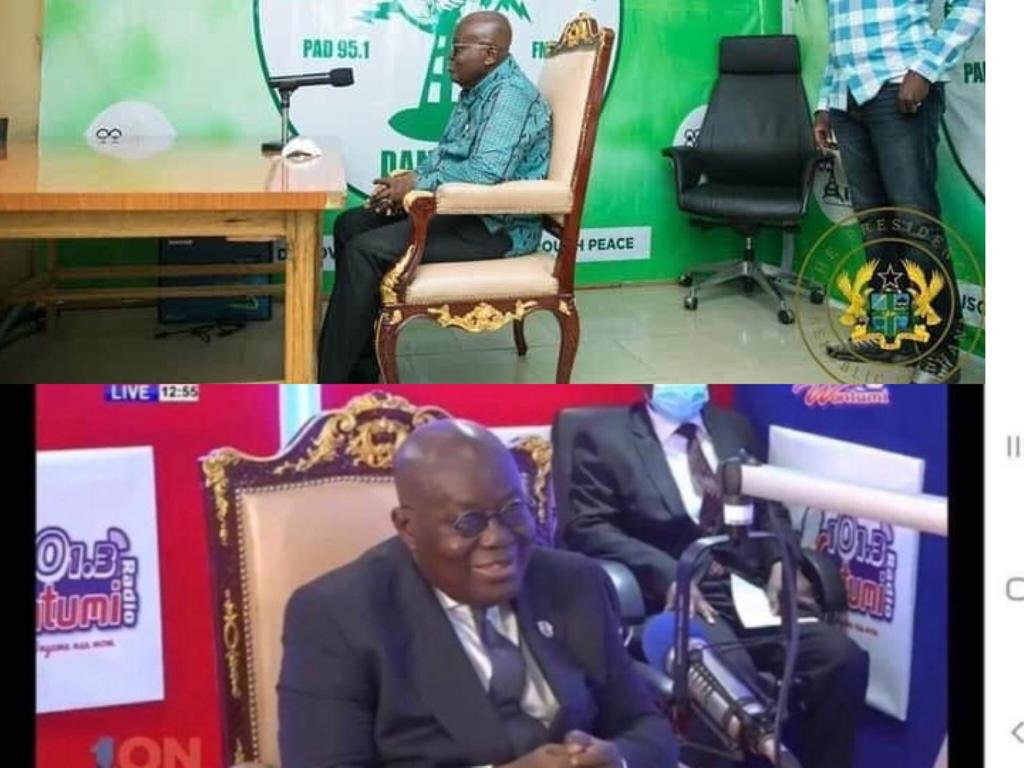 Normally and as common sense suggest, since Ghana was ushered into the 4th republic, before every election, every president from J.J Rawlings, J.A Kuffour, Atta Mils to John Mahama, they all showcased their achievements to Ghanaians before asking them for extension of their mandate in office.

President Akufo Addo embarked on a tour to the North, Savannah and Ashanti Regions of Ghana over the past few days and the notable thing he did was carrying his presidential chair along to every stop like a baby’e feeding bottle and telling the people his achievements as follows;

1. He is their brother from Kyebi

2. Cut sud a water project instead of commissioning finished projects because he did none.

3. He was calling for unity as he dies knowledge of how Voltarians are being prevented from registering at some polling stations in the country.

4. Telling people in Ashanti region on radio he is surprised John Mahama is contesting him for president as though the presidency is his family property.

5. He didn’t tell the people Of Ashanti Region how many hospitals he built so far as president.
READ ALSO; Money Cannot Buy Wisdom – Party Communicator Fires Chairman Wontumi And The NPP
6. He failed to show them how many many Power Generation Capacity the current NPP braggats have added to  Ghana’s Electricity Grid (none).
J.A Kufuor added only 2% electricity to the national grid during his 8 years.
The NDC & John Mahama added 52% power generation capacity to Ghana’s Electricity Grid. Mahama’s Karpowership Power Plant Alone Added 26% To Power Generation Capacity In Ghana.
7. Again Akufo Addo Failed To Showcase The Number Of Water Plants He And The NPP Has Built Soo Far ( Zero) Mahama And The Great NDC Built Teshie Desalination Water Plant, Kpong Water Project, K3 Water Expansion Project In Kumawu Konongo Kwahu-Tafo, Wa Water Expansion Projects, Etc.
So basically, president Akufo Addo Akufo just went around the country to showcase the look of the presidential chair for re-election. Or now the presidential chair is part of a president’s achievement?
Imagine if Akufo Addo also continued developing this country just like how Mahama started. Imagine where Ghana would be today. But he goes about pedling falsehood while his big fat elephant-sized family and friends government continues to empty the national purse.
READ ALSO; President Nana Addo sends his presidential chair to a radio interview in the Northern Region
Source: Kwabena Frimpong
Related Topics:Akufo-AddoFeaturedGhana News
Up Next