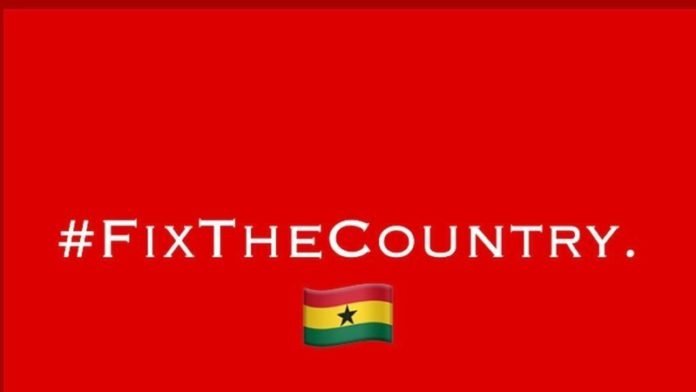 The convenors of the #FixTheCountry Movement say they will demonstrate on November 26, to register their dissatisfaction with the 2022 Budget.

In a statement on Friday, the convenors said they have already notified the Ghana Police Service about their intentions and are ready to pour unto the streets to express their disgust.

According to leaders of the social advocacy group, certain aspects of the Budget are inherently “ridiculous”, hence their decision to protest.

They further said the 2022 Budget smacks of “purposeful deceit” and “the absence of truth and genuine accountability”, a situation the convenors say will not be tolerated.

They are, therefore, imploring the 275 Members of Parliament to outrightly reject the 2022 Budget estimates, which were tabled before Parliament on November 17, 2021.

Read Also:  Barbados Declared a Republic After Many Years of Slavery Under Britain

“The protest is to register our displeasure at the ridiculous proposals of the 2022 Budget and demand Parliament not to approve the Budget in its current form,” the statement said.

The protest is expected to begin from the Tema Station in Accra, near the National Hockey Stadium, after which the protesters will head to the front of the Parliament House.

Members of the #FixTheCountry Movement are also craving the indulgence of all well-meaning individuals and the media to rally behind their intended demonstration and accord them the needed support.

On Wednesday, November 17, the Finance Minister, Ken Ofori-Atta, presented the 2022 Budget estimates to Parliament for approval.

As part of his presentation, he indicated that government wants to abolish all road tolls and impose a 1.75% E-levy on all electronic transactions.

These two items in the Budget have since sparked series of debates in public discourse, with many splitting hairs on the said proposals, amongst others.

Meanwhile, the Police have, upon receipt of the letter, invited the convenors on Monday, November 22 “for further deliberation to ensure a peaceful demonstration.”

Meanwhile, the Ghana Police Service has scheduled to meet convenors of the FixTheCountry Movement over their decision to protest on Friday, November 26, 2021.

The meeting is planned for Monday, November 22, 2021 at the Greater Accra Regional Police Headquarters.

In a letter signed by the Deputy Accra Regional Police Commander, DCOP E.A Sakyi, the Police explained that the meeting is for further deliberations to ensure a peaceful demonstration.

The response from the Police came a few hours after convenors of the movement issued a statement indicating that they have notified the law enforcement agency about their intentions to hit the street.